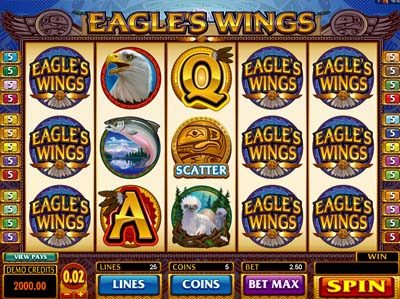 Taking on the theme of a game based on an eagle’s life, you wouldn’t really think that this could be such an entertaining game overall. However, when you look deeper than the title of it, you’ll see that it’s actually quite an endearing product from Microgaming. The incorporated soundtrack is quite terrible unfortunately, but in the event of agreeing with us, you can always click that ever present mute button. The game’s reels are filled with symbols of various different moments from the bird’s life, such as being a chick in the nest, swooping in to catch its prey, and also an icon of that very prey – a salmon. Not only that, but there’s also the addition of the regularly seen A, J, K and Q icons as well.

Eagles Wings provides a five reel and three row layout, and there’s also the addition of 25 different bet lines. These can be customised at your own leisure, by using the ‘Lines’ button. Furthermore, you have the chance to adjust the amount that you bet per spin, and this is done by altering the value of a single coin in the first instance. Here, you can select from a range between £0.01 and £1. You can also change the amount of coins played per line, and this offers a range of between one and five, which will therefore allow a maximum overall wager of £125 per round.

The addition of a wild symbol in this game is represented by its logo. As a wild icon, it will substitute for any other, with the exception of the scatter symbol, and in doing so, it can form winning combinations. The wild icon will show up in stacked format across the reels, and it will double your pay out when substituting for others.

The scatter icons of this game are represented by the gold, bejewelled coin. Should you spin three or more of these onto the reels in any location, you’ll trigger the ‘Lucky Eagle Bonus’ round. Pick from the lucky eagle coins to reveal the number of freespins awarded. You’re able to receive up to 60 freespins and all wins during the round will be multiplied by three.

Overall, this game is quite entertaining to play. It features high quality graphics and animations as well as intriguing extra special rounds to make your game play as interesting as possible.