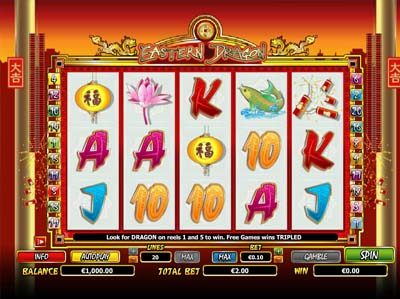 The title of this game should instantly inform you what it’s all about. It’s very Eastern influenced, with ancient Chinese patterns and designs coming through in droves, while dragons make up the mythical creature, which has its own year in Chinese culture. As such, you’ll find icons on this game’s reels of pink water lilies, koi carp, fireworks, lanterns with characters scrawled on to them, and of course, symbols of dragons. Accompanying these are regular appearing video slot icons in A, JJ, K, Q, 9 and 10. Each of these has been designed well enough to contribute a visual appeal of sorts to the interface.

The game itself is played on five reels and three rows worth of a layout, while the developer, NextGen Gaming, has added a total of 20 separate pay lines into its offerings. The lines can be changed around if you feel the need to wager on fewer, and players are also able to alter their bet per round with the plus and minus buttons found to the right of the amount currently shown. This starts from its minimum of £0.02 per active line, and will increase up to a maximum level of £4. This allows all gamers to place the highest wager of £80 per spin, if they should so choose.

The game, as with just about all other online video slots from this developer, features a wild icon. This is represented by the previously mentioned dragon icon. This will stand in for all other icons on the reels in order to create a win, with the exception of the scatters. Not only that, but it will also double the pay out of any wins if it is incorporated into a win.

If the wild icon makes an appearance on reels one and five simultaneously in any location, this will trigger Eastern Dragon’s freespins round. A total of 15 of these will be awarded to you initially, and all prizes are tripled in this round as well. Any wins in this round which feature the dragon wild will be multiplied by six!

On top of this, the game also features a scatter icon. This is represented by the pendant image, and these pay out wherever they should appear on the reels, with five showing up offering a pay out of up to £200, depending upon your wager placed.

Eastern Dragon provides slots gamers with a very familiar theme. The Orient is so often incorporated into products that it’s almost on a par with ancient Egypt being used. However, this NextGen Game certainly does it on a well enough basis, presenting visually pleasing reels and game play.