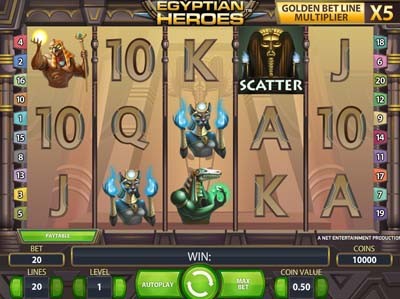 If you’re looking for innovation, Netent certainly has it. As we’ve mentioned in many reviews before, and as is clear to many gamers, products that have been designed with an ancient Egyptian theme are numerous. So, it’s very refreshing to see this provider not only base this game around that theme, but take it in a whole new direction at the same time. Egyptian Heroes presents you with reels filled with various different authentic looking warriors, from the sceptre-and-orb-wielding Horus through to the blue flame-bearing cat and the crocodile-headed creature with a magical green diamond in his hands. It merges the old, that being ancient Egypt, with the new and popular, that being superhero media.

The game is played on a five reel and three row interface, while the developer has also added a total of 20 separate pay lines alongside. These can be customised, so if you have a preference for gambling on less, do feel free to alter it. In addition, players can change the coin value from its minimum of £0.01 up to £0.50 per pay line, while the bet level can be switched from one to 10. This allows all gamers to place a maximum wager of £100 per spin.

One of the first things you’ll notice about this game is that before every spin, a golden coloured line will show. This is the ‘Golden Bet Line’, which affects a single pay line. It changes at the start of every spin, but if you manage to land a winning combination on it, your winnings will be multiplied by the multiplier which shows at the top right of the reels. This can offer anywhere between times two and times five.

There is a scatter icon included in the game as well, which is represented by the Pharaoh’s tomb head. If you spin three or more of these in the main game, you’ll be rewarded with a freespins round. During this round, a sticky expanded wild will cover the entire middle reel for a chance at bigger wins. Three scatter icons give you 10 freespins, four will provide you with 15, and five will offer up 20 altogether.

Finally, the wild symbol which is included, will substitute all other icons on the reels to create the highest possible win. The only icons exempt from this rule are scatters. Wild symbols will appear on reels two, three or four, and will expand to cover the whole reel when completing winning bet lines.

Egyptian Heroes is a great merger of two themes brought into one and provides thoroughly entertaining game play.