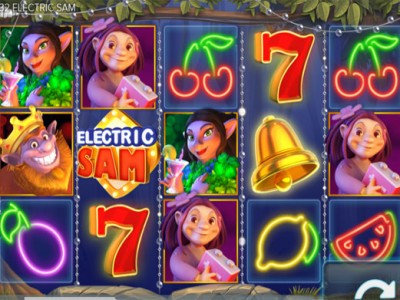 Electric Sam will take you along to a mysterious and wonderful world of norn-like creatures, with Electric Sam as their supposed king and leader. The reels are filled with various different characters from this world, as well as traditional symbols that would usually be found on generic slot machines. You’ll find lemons, plums, watermelons, 7s and bells, all of which appear as neon-lit lights.

There’s a total of five reels and three rows available for you to play on. The game includes 243 different ways to win and 12 different bet levels alongside. These range from the minimum of £0.20, up to the maximum of £100 per spin. This incorporates 100 coins per bet, ranging from the very minimal amount of £0.002 to the maximum of £1. You also have the option of using one of the Elk Studios betting strategies, allowing you to place wagers in a predetermined way.

Sam himself acts as this game’s wild symbol, and not only will he substitute for all other symbols on the reels, except free play symbols, but he’ll also act as a sticky wild when appearing in free play mode.

Finally, when three or more symbols of Maggie appear during the free plays mode, she sets off a chain of imploding symbols, zapping them away for added chances of winning.