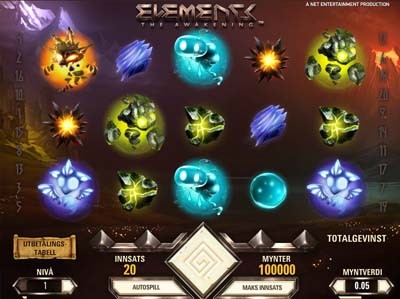 Bringing together all the elements of earth, air, fire and water into one product is exactly what Netent have done with this game. Its icons are made up of the respective matter, but feature creature-like life forces within, presenting players with an almost fantasy-like product to play. The accompanying music is calming for spinning time, only gaining some chaos when a winning combination is formed. The backdrop of the game is truly amazing to view, while game play is spectacular in itself.

Five reels and three rows are what is provided within this game, with a total of 20 separate paylines included on top. The lines are fixed at this amount, but the bet level can be changed between one and 10, while the coin value is alterable from the smallest amount of £0.01 up to its maximum of £0.50 per pay line. Therefore, all players can place a maximum overall wager of £100 per spin.

The cubic icon acts as this game’s wild symbol, and this appears on all reels except the first. This stands in for other symbols and crafts winning combinations.

The game also includes an ‘Avalanche Meter’, which fills up for each successive fall containing at least one bet line win, up to a maximum of four Avalanches. The colours shown on the meter will match the leading element in the round.

Four or more consecutive Avalanches in the main game will trigger the freespins, or free falls mode as it’s known in Elements. The ‘Energy Meter’, shown atop the spin button, will provide information on which freefalls mode will be triggered, with each of its four sections representing the four incorporated elements.

These four modes are the ‘Fire Storm Wild’, which produces fire storm wilds with the ability to spread in any direction on columns two, three and four, the ‘Air Storm Wild’, which sees two wilds fall randomly on the columns in the first free fall and remain in the same place for the duration. There’s also the ‘Earth Storm Wild’, providing wilds on reels two, three and four which remain in the same position until they have been included in a win, and finally the ‘Water Storm Wild’, also appearing on the central three reels as an expanding wild.