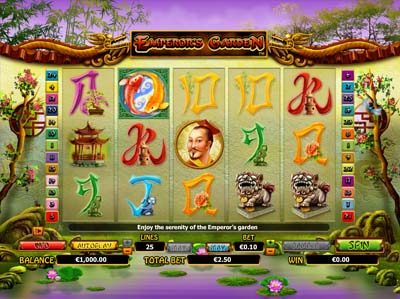 Emperor’s Garden, from developer NextGen Gaming, has been adapted into both a slot game and a scratch card. Each of them feature various different icons which relate to its oriental theme, so, be prepared to spin through reels filled with wooden garden pagodas, animal statues, koi carp, pink water lilies, an Asian man and a scenic view. These are all designed in a wonderful way, and not only that, but you’ll find that there has been a very appropriate soundtrack included, presenting you with the old Eastern-influenced tones as you spin your way through the game.

There are five reels included in the game, as well as three rows, so it’s a familiar layout for gamers to appreciate. In addition, you’ll find a total of 25 pay lines have been added, and these can be changed in sections of five via the settings page. Furthermore, you’re also able to set your wager amount here too, with the minimum coin value being £0.01 per payline, and the maximum being £2. With everything set at maximum level, an overall wager of £50 per spin can be played.

The scenic shot of the garden is what provides this game with its wild icon. As such, it will stand in for any other symbol to create a win, except scatters. The ‘Garden Wild Feature’ will be triggered when the symbol appears anywhere on reels two, three and/or four, and this will see the symbol expand to cover the entire reel.

Scatter symbols in this game are represented by the koi carp, and these pay out wherever they appear on the reels. Should three or more of these show up, you’ll be granted a total of 10 freespins. During this round, all wins featuring the scenic garden are multiplied by three.

While Emperor’s Garden is a nice enough game, it doesn’t feature a huge amount of specialities. However, it does present a visually pleasing product with some intriguing enough game play included.