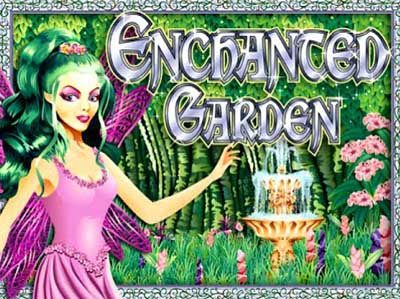 Enchanted Garden is an online slot game by software developer Realtime Gaming. It’s not a new slot title, which you will be able to easily tell from the graphics. This means there are also no fancy animated features, and the visuals don’t have that high definition touch to them that most modern day slots boast. But they still have a nice charm about them, nevertheless. Obviously, since the theme is gardens, there’s plenty of greenery visible both on the reels and beyond them. You can see vines lining each and every one of the reels separately, sometimes spreading onto the symbols. And on either side of the reels you can see two fairly tall trees, the branches of which are towering above. It’s night, as far as we can tell from the color of the sky and the smoky clouds in it. There’s also no real soundtrack to accompany gameplay either. 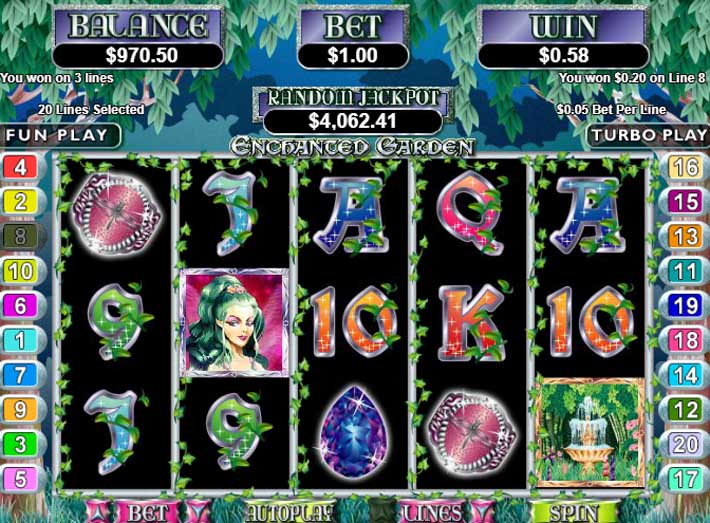 As far as the symbols go, they include the less valuable card symbols. And these, by the way, are very nicely styled to fit in with the theme. Each comes in a different color, with sparkles and a silver frame. And the symbols in question are A, K, Q, J, 10 and 9. These then make way for the higher value icons that in turn start off with the some jewelry items. One is a very large teardrop-shaped blue gemstone. And the other is a pink and silver bracelet. Next in line is a colorful butterfly, following which is a unicorn symbol. The unicorn is also the most lucrative symbol on these reels. The layout in Enchanted Garden is quite standard and features a 5 reel by 3 row grid. There are also 20 paylines available in total, but you don’t necessarily have to play on all of them. This also affects the betting range accordingly, making it rather flexible. The minimum stake you will be able to make on these reels is 20c per spin. And the maximum available betting amount here will set you back a total of $100 per single spin.

Enchanted Garden features a fairy as its Wild symbol. This means that the fairy will be able to replace any of the other symbols on the reels. And that way it can help create better winning combinations. It will also double the payouts for the winning sequences it partakes in. However, the Wild does not offer any payouts of its own. In addition, you can’t expect it to land just about anywhere on the reels. It will only appear on reels 2, 3, 4 and 5. And there’s also an exception as to the symbols that it can substitute for, namely the Scatter icon. 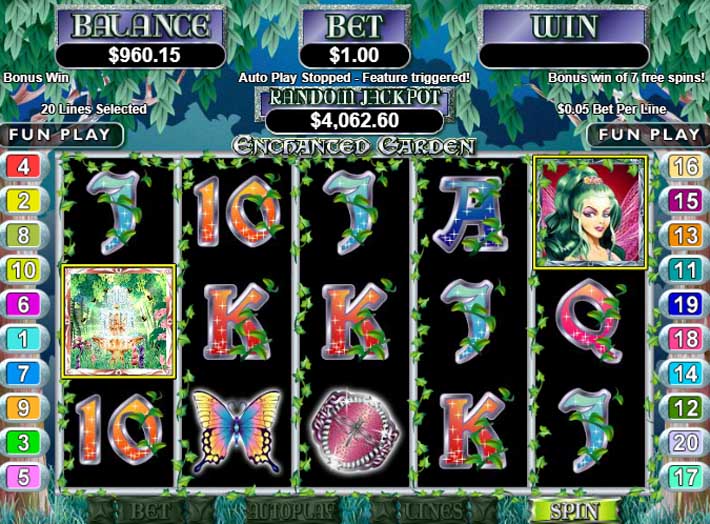 In turn, the Scatter depicts the magical garden itself and, unlike the Wild, it will be able to appear in any position, anywhere on the reels. Its payouts aren’t particularly compelling either. But it’s the combined efforts of the Scatter and the Wild that are the game’s main attraction. You will need to land the Scatter symbol on reel 1 and the Wild icon on reel 5 at the same time during a spin. This will activate the Firefly Feature, which will award you a total of 7 freespins.

During the freespins, you will notice that some of the symbols on the reels will have a firefly background. You will want to look out for these, as they can award you extra freespins on top of your remaining ones. In order for this to take place, though, you will need to land at least 3 of them at the same time, anywhere on the reels. Each of those symbols will then give you up to 3 extra freespins. And on top of that, you will also be able to benefit from a 3x multiplier during the freespins. In other words, all your winnings will be tripled all throughout the bonus round. And you can retrigger it if you land the Scatter and Wild on reels 1 and 5, respectively, as well. 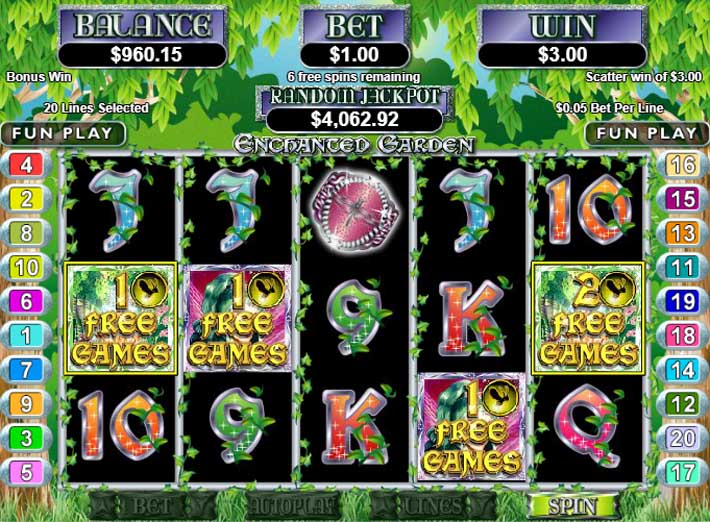 Last but not least, Enchanted Garden also has a Progressive Jackpot to tempt players with. It’s constantly on display on the main screen, just above the reels. So, you can monitor it as you play. But note that the jackpot is awarded completely at random, and that can happen at any point in the game.

Enchanted Garden is a very simple offering from RTG, one in a series of similar titles from their earlier days. But despite the older graphics and simple approach to gameplay, it’s still a very decent online slot game. The bonus round has much to offer, including the very lucrative 3x multiplier and retriggers. Furthermore, the progressive jackpot is another point of interest for players out there. All in all, it’s a good medium variance slot game.