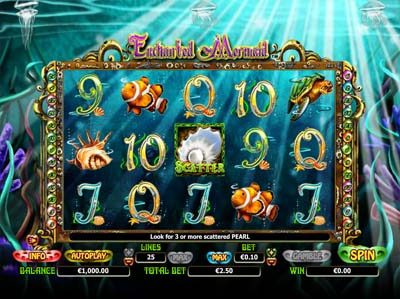 Have you ever wanted to be tempted by an enchanted mermaid. Well, if so, NextGen Gaming have provided an ample opportunity in this game. It features some intriguing graphics and animations, and includes reels that are filled with various forms of underwater lifeforms. Therefore, you’ll get to spin your way through symbols of seahorses, turtles, angel fish, seashells, oysters, and of course, a mermaid. These are all joined by the regular video slot icons of A, J, K, Q, 9 and 10.

There are five reels and three rows included in this game in total, and NextGen have also included a total of 25 separate pay lines alongside. These are able to be customised if you have a preference for placing wagers on fewer lines, as can the included bet amount. This alters between its minimum of £0.02 and up to its maximum of £4 per active pay line. Therefore, players are able to place a maximum overall wager of £100 per round.

The mermaid icon works as this game’s wild icon, and this only appears on reels two and four. This will substitute for all other icons on the reels, except for the scatters. Should this symbol appear on either reel two and/or four, it will activate the ‘Mermaid Expanding Wild’ feature. This sees the wild expand across the entire reel.

The scatter symbol which has been added to this game is represented by the pearl-bearing oyster, and this will pay out wherever it appears on the reels. The freespins included in this game are triggered by the appearance of three scatters. You have to choose between three different options:

The Enchanted Mermaid slot game is able to provide a thoroughly intriguing game, although it doesn’t provide so many special extras. However, you’re able to spin an enjoyable few rounds with this one and experience a visual treat on the whole.