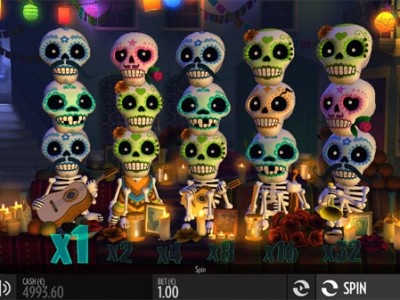 Let’s head to Mexico for a cinco de mayo celebration, featuring fireworks, music and a good time to be had by all. And what is a cinco de mayo celebration without a selection of ornately decorated skeleton heads? That’s exactly what you’ll find in this game. The reels are filled with green, blue, pink and orange painted skeleton skulls, all of which fall on to five skeleton bodies placed at the bottom of the reels. Every winning combination will blurt out a line of a song before seeing the skulls explode to make way for more.

The entertaining five reel, three row game also provides players with 17 fixed paylines. Furthermore, you can select from several different values of wagers, starting from £0.10 and increasing up to the maximum of £100 per spin. Players can also choose to autospin the reels, starting from five up to a maximum of 5000.

There’s also an Explosivo Wild Symbol, represented by a vivid yellow skull, complete with hair and sunglasses. This will stand in for all other symbols to create a win. This will also blow up the eight closest surrounding symbols for a new chance to win, should it be featured in a win.

Finally, for each new drop of skulls, a multiplier meter, which can be seen at the bottom of the reels, will increase through levels of times one, two, four, eight, 16 and 32. The inclusion of these provide bigger payouts.