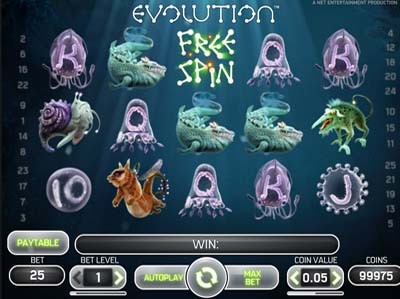 Wouldn’t it be wonderful to take a journey back to a time when life began? As cells began to divide and multiply, and creatures started venturing forth from tiny microbes into various different animals. Well, with Netent’s Evolution game, you’re able to take a glance back into what such forms of life might just have looked like. These endless forms most beautiful come to life on the reels, with creatures such as the Basilisk Pluma being clearly related to today’s rodents, Albus Slugus in clear evolution towards becoming a snail, and Basilisk Hairicus looking like something from a Hollywood fantasy film. These, and several other critters, all take pride of place on this game’s reels.

There are five of these included in the game, as well as three rows worth of a layout, while a total of 25 paylines have been included as well. The coin value is able to be altered from its minimum of £0.01 right up to the maximum of £0.50, and the bet level is also able to be changed by the player, increasing up from one through to 10. Therefore, a maximum overall wager is allowed of £125 per spin.

Wild icons are present in the game, and these will appear on reels two, three, four and five. Wilds act as a substitute for any other symbol on the reels, except for freespins icons.

Freespin icons are also scatters, so three or more of these appearing anywhere on the reels will trigger the freespins round. The amount of freespins you receive will depend upon the amount of scatter icons that show up, with three giving you 10 freespins, four giving you 15, and five providing you a maximum of 20.

There’s also an ‘Evolution Feature’, which allows players to climb up the symbol scale, providing chances for even bigger wins as the symbols themselves actually evolve. During freespins, a winning combination will activate this feature, which will then see all icons included in the combination, and all identical ones on the reels evolve into the next level!

This game takes a great theme and runs with it, providing wonderful graphics, music, and some awesome game play.