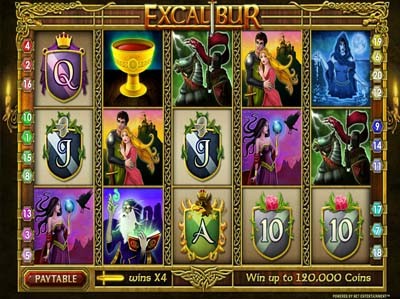 The tale of Excalibur, the legendary sword of King Arthur, is one that is known far and wide, and it has been adapted before into one or two video slot games. This one from Netent has very nicely designed icons and a soundtrack which tells of medieval times just from the flute being played and the horses neighing in the background. The reels have icons of Arthur himself, as well as the wizard Merlin, Guinevere, the lady in the water, the sword in question, and one or two other relevant symbols. Each of them are wonderfully animated when a part of a winning combination, providing entertaining game play along the way.

The product has five reels and three rows worth of a layout, meaning that regular slots players will be seeing something familiar. There are also 20 separate pay lines included, although these are fully customisable. Gamers are also able to change the coin value around from its minimum of £0.01 per active pay line, up to its maximum of £1. The bet level can also be adjusted from one through to four. Therefore, the highest wager that is able to be placed in this game is £80 per spin.

The icon of Excalibur is, of course, the wild symbol here, and this will stand in for all other symbols on the reels, except scatter and golden wilds, to form a win. Pay outs including this icon are also doubled.

The golden wild is the exact same symbol, but features a gold hue over it. This will only appear on the third reel and works in the same as the standard wild, but will quadruple any pay out should it be included.

Finally, the scatter icon is represented by the Holy Grail, which is filled with red liquid, presumably wine. Three or more of these appearing anywhere on the reels will reward you with some freespins. If you should spin three, you’ll receive 10 freespins, while four will give you 20 freespins, and five offers up a total of 30. Any wins during this round will provide you with triple the pay out.

Netent’s ability to take a theme and run with it is very prominent in this game, which provides amazing graphics and animations, intriguing game play and pleasing additional features.