Eye of the Kraken 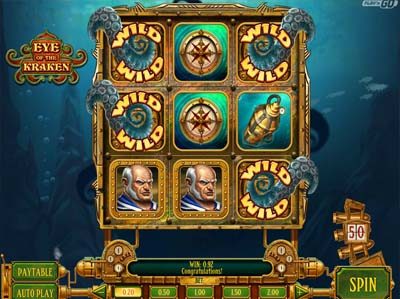 Eye of the Kraken Review

Software developer Play’n Go has offered us an exciting underwater expedition on the hunt for the mythical sea monster – the Kraken. Eye of the Kraken has a visually very rewarding and detailed, high-quality design. The backdrop pictures the murky waters of the ocean depths, with schools of fish swimming across the screen. The occasional bubbles that seem to appear from somewhere deeper yet have that nice unnerving touch. And speaking of unnerving, the soundtrack will also greatly help create a kind of eerie atmosphere. As for the symbols, they feature a variety of different 19th century diving gear. First up are the heavy boots, followed by an air tank, harpoon gun, compass and diving helmet. The higher value symbols include three different characters and a torpedo.

As for the layout, it’s rather simplistic with only 3 reels and 3 rows. There are 8 paylines in total and betting amounts range from a comfortable 20p per spin up to £100 per spin. The average RTP is around 96.4%.

Despite the rather small grid, this slot has quite the number of symbols, including a Wild. It comes with a feature called the Wild Kraken Tentacles, which can occur randomly and replace any of the other symbols on the reels with Wilds. The only symbol it cannot substitute for, however, is the Scatter. Yes, there’s one of those, too, but more about it later. The feature will also offer impressive visuals, making the screen shake, as the Kraken’s tentacles crawl onto the reels.

This slot also has a number of special features, which you can benefit from. For example, you will notice a meter that counts back as you land torpedo symbols on the reels. Once you have gathered a total of 50 torpedoes, you will enter the Battle the Kraken bonus round. A new screen will show you the legendary giant squid and you will have to pick three of its tentacle. They will each reveal different cash prizes with a potential maximum of up to 500 times your stake.

Be on the lookout for the helmets as well, though. If you land 5 helmets at a time, you will trigger Dive Mode, which will award you 9 freespins. And as soon as you’ve entered the freespins game, keep an eye out for the Scatter treasure chest. It can offer some pretty massive payouts. In addition, Dive Mode has a separate Wild symbol, as well – the Eye of the Kraken. Like most Wilds, it can replace all other symbols, save for the Scatter.

Eye of the Kraken is a great game with stunning graphics and a fairly unusual and unexplored theme. Aside from creating a compelling atmosphere, the developers have also managed to keep gameplay entertaining. Some of the features may not appear as frequently as desired. But variance is in the middle range, so payouts should be satisfactory by the very least.