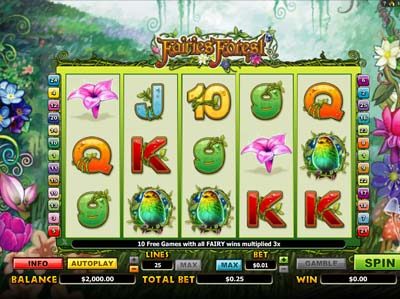 If it’s fairytales and fantasies you’re looking for from an online video slot, you’ll definitely want to check out NextGen Gaming’s product, Fairies Forest. It takes place in a wondrous looking scene, filled with vibrantly coloured flowers, lush meadows and hanging vines. The reels themselves are presented with a multitude of different icons on them, including vividly designed plants, a golden unicorn horn with a sparkling globe attached to it, a glimmering forest scene, purple toadstools, a multi-coloured bird, and the standard symbols of A, J, K, Q, 10 and 9. These have all been designed in a beautiful way, further enhancing your journey into the magical forest.

As far as the interface goes, there are five reels and three rows included in it, and NextGen have also added a selection of 25 pay lines alongside. These can be customised, allowing you the opportunity to decrease them, if you have a preference to do so. Further to this, gamers can also alter the coin value per active line as well, with the minimum for this being set at £0.02, and rising up to its maximum level of £4. Therefore, an overall maximum wager of £100 can be wagered each spin.

There’s a wild icon included in this game, which is represented by the fairy with the multi-coloured hair. This can appear on all reels, but should it appear on reels two, three and four, not only will it substitute for all other icons, except scatters, but it will also expand across the entire reel as well. This provides further opportunities to craft a win.

As mentioned, there’s also a scatter symbol, which is the previously noted shimmering forest scene. This will provide a pay out wherever it shows up on the reels, offering a pay out of £100 for five showing up on the reels at maximum wager level. Furthermore, you’ll trigger the 10 freespins round with this icon. All you need to do is ensure that three or more scatters come into view. Wins achieved during this round are tripled as well, and the freespins can be re-triggered!

Thematically speaking, fairies and fantasy is very much overdone, although this product provides one of the better games to play. It’s very visually beautiful and provides some intriguing specialities alongside.