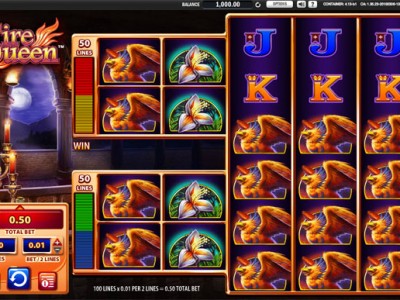 If myths and magic are your favourite genres, then Fire Queen should be a game to try. The game features symbols of the title character, a phoenix, a flame-maned horse, a flame-kissed flower and various trinkets and potions that the Fire Queen herself has created.

When it comes to slot game layouts, this product has a unique one of its own. Featuring 100 different paylines, Fire Queen does have five reels, but the first two reels are separated across the middle, so you’ll find two rows of two, followed by reels three to five having six rows each.

In addition to this, players are able to place a minimum wager of £0.01 per two lines and a maximum of £2.00, therefore offering up an overall maximum bet of £100 per spin. The paylines themselves aren’t customisable, so you’ll always have 100 different lines to wager on.

The symbol of the fire queen is the game’s wild symbol, and she will act as a stand in for any other symbol to create a winning combination. The only exception to this is the feature icon.

Speaking of which, the feature symbol is represented by a golden orb with a phoenix image emblazoned on it. This particular symbol will only appear on reels nine, 10 and 11. The icon acts as a scatter in the game.