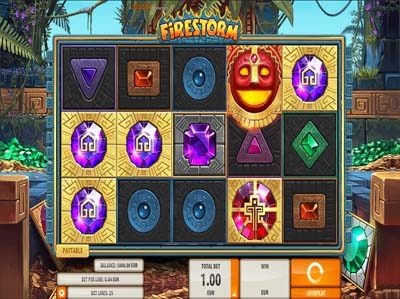 If you enjoy ancient civilisations, like the Aztecs or the Mayans, Firestorm is definitely a slot game that you should check out. Set in an ancient temple, the reels are filled with intriguing gemstones of various shapes, sizes and colours. There’s also a beautiful piece of music that plays along with your gameplay, incorporating South American pan flutes and other instruments into it.

The game has five reels and three rows worth of an interface, and also includes 25 paylines alongside. The paylines are not customisable, but the coin value included in the game can be altered from the minimum of £0.01 per line to £4.00, giving you the chance of placing an overall maximum wager of £100 per spin. There’s also an autoplay button included, allowing you to spin the reels up to 1000 consecutive times at the same wager level.

There’s a standard wild symbol included in Firestorm, which will substitute for all other symbols, except for the bonus symbol.

The bonus symbol itself is represented by a flaming, Mayan mask, and likewise, this will also substitute all other symbols on the reels, but two or more of these will trigger the re-spins feature. Wild symbols, bonus symbols and a randomly selected other symbols lock in place for the re-spins. Three or more bonus symbols provide a multiplier up to times five of your wager, and more locked symbols on re-spins provide an extra re-spin of the reels.

Firestorm is a graphically pleasing game with interesting gameplay and added extras on top. The re-spin feature is a pleasant addition, and the included soundtrack and imagery are both wonderful added benefits of the product.