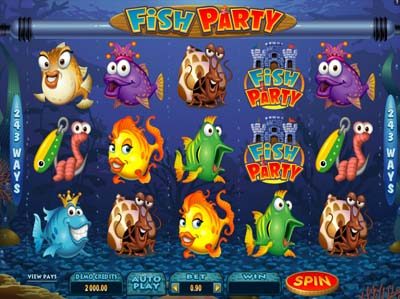 It seems quite odd to think of fish having a party, but obviously someone was having a wild time when they thought up the basis for this game. However, despite the crazy theme, Microgaming have designed this one with the utmost attention to high quality graphics and details. It’s set under the ocean, with air bubbles constantly rising to separate each of the reels. On these reels you’ll find the various different thematic icons, and these begin with the sea snail and is followed up by the worm on a sharp hook. There are three other lower paying icons, which are the starfish, and two other fish. Three more fish make up the higher paying icons, while a treasure chest provides another.

As far as playing the game is concerned, this is done on a five reel and three row interface, so everything should be quite familiar for regular gamers. Further to this, you’ll find that the developer has included 243 ways to win into this game. This particular feature cannot be altered in any way, but players do have the chance to adjust the wager that they place per spin. This starts with changing the value of a single coin between £0.01 and £0.25, while the amount of coins you play per active pay line is adjustable between one and 10. Therefore, a maximum overall wager of £75 per spin can be played.

There are a couple of different specialities included in this game, and the first of these is represented by the game’s logo. This is the wild icon of the game, and this appears stacked on all reels during the base game. As a wild symbol, it will substitute for all other symbols on the reels in order to form a winning combination, with the exception of scatters.

And speaking of the scatter icon, this is represented by the oyster. Scatters pay out wherever they show up on the reels, with five of them multiplying your wager to provide a maximum pay out of 7,500 coins. Should you spin three, four or five of these in to view, you’ll trigger up to 20 freespins of the reels. This round also features super stacked wilds, and during this round, the higher paying symbols mentioned are stacked across all reels.

Fish Party is an intriguing game on the whole, but we think its best feature is its great quality graphics. Add the special features and the general game play and you’ve got yourself a good slot game.