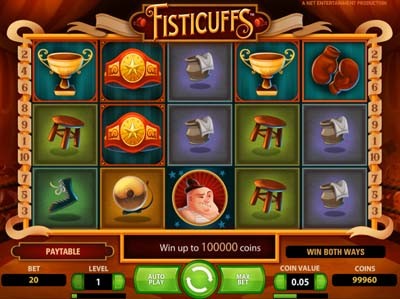 It’s time to lace up those boots, put on your boxing gloves and head back to the 1900s – a time when such a sport was classed as being solely for gentlemen. Fisticuffs from Netent provides all the imagery of such a time, merging the now popular sport with a touch of comedy to bring forth a wonderful game. The reels are filled with icons that are very thematically appropriate, take for example the championship belt, or the time keeper’s bell, or even the golden trophy. There’s nothing lacking here, and even the cheerful, humorous ditty that plays with every spin of the reels is pleasing to the ear, thanks to the cartoon-nature of the game.

There’s five reels and three rows included here, so nothing different to a standard slot game. A total of 10 fixed pay lines are also integrated into it, while the coin value is able to be changed between £0.01 and £1.00 per line. The bet level will increase your wager as well, being able to be switched between one and 10, and therefore allowing all players the possibility of placing a maximum overall wager of £100 per spin.

This game has a couple of different wild icons, starting with the Straight Wild. This is represented by the chunky boxer, and will only appear on the third reel, substituting for other symbols to create a win. The diagonal wild, represented by the skinny boxer, will only appear on reels two and four, and likewise, substitutes for other icons to make a winning combination.

In addition to this, there’s a single re-spin of the reels awarded after a boxing feature, with all wilds remaining on the reels for the duration, and stacked wilds can appear on reel one and/or five alongside.

The creativity and design behind this game are second-to-none, and Netent has certainly worked with this theme to a wonderful extent, providing an intriguing and amusing product.