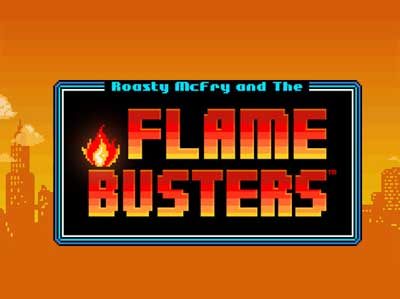 If you miss the golden days of arcade games and wouldn’t mind a hefty throwback to those times, you simply need to check out Flame Busters. This online slot games is brought to us by slot machine provider Thunderkick. And if there’s anything that this particular provider is well known for, it’s for their unique approach to themes, graphics and overall game vibes. Who would have thought to create a contemporary slot game that’s visually so not in this era? And players love it. The graphic design is perfectly outdated, and the developers have even included a very appropriate soundtrack that will greet you before the game even loads. The backdrop here depicts the pixels of a cityscape and in the foreground we have firefighters climbing a building, on their way to perform their duty. As for the reels, each position on them is a window where you will see the different symbols. 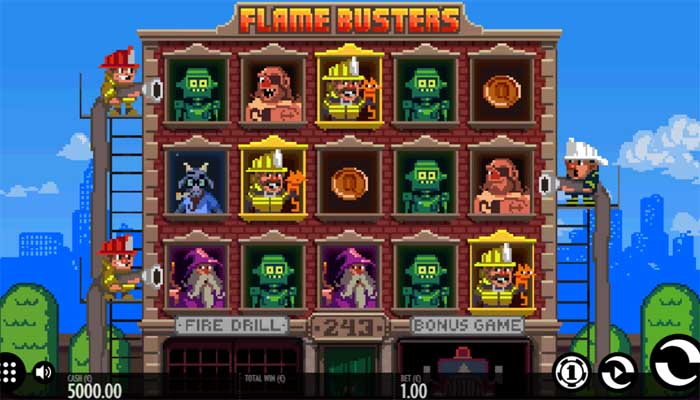 And the symbols here start with the lower value symbols. Only you won’t see them in their traditional appearance, instead they each come on a coin – like the ones you needed to collect in your typical arcade. The symbols here are A, K, Q, J and T for 10. After them, we have a number of character symbols including a smoking goat. Then there’s a green robot, and after that there’s what we can only assume must be a pirate with an eyepatch. Then we have the wizard, wearing a purple cloak. And last but not least we have the highest paying symbol, offering prizes of up to 10 times your stake – the firefighter holding a rescued orange cat. As for the slot design in Flame Busters, it features your regular 5 reels and 3 rows. There are, however, a whopping 243 ways to win here. So, needless to say that you won’t have the opportunity to change the number of paylines in this game. Stakes here are pretty liberal, though, and start at a very comfortable low of only 10p per spin. The maximum amount you will be able to wager is £100 per spin. And the Return To Player is also satisfactory at 96.1%.

In addition to those symbols we already mentioned, Flame Busters also features a few special symbols. One of them, for example, is the Wild icon in this game. It depicts the letter ‘W’ and can show up in any position, anywhere on the screen. Furthermore, it will be able to substitute for all of the other icons on these reels. The only exception is made for the game’s Scatter symbol. However, the Wild doesn’t offer any payout of its own.

Another special symbol that this game has on offer is the Fire symbol. It actually acts as a Mystery icon, which means that when it lands on the screen, it will transform to become another symbol. It can randomly become any of the regular symbols, so technically it could also help in creating better winning opportunities. The only two symbols that the Fire icon will not be able to turn into are the Wild and Scatter symbols. 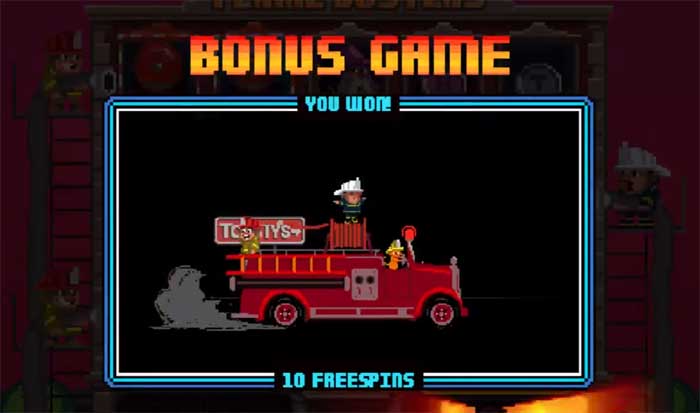 And this finally brings us to the third and final special symbol – the fire alarm Scatter icon. Just like any of the above symbols, the Scatter can appear in any position on any of the five reels during gameplay. And similarly to the Wild, it will not be able to offer you any prizes of its own. However, it will be able to trigger the Bonus game and that sort of evens it out. You will be looking to land 3, 4 or 5 Scatter symbols all at the same time in order for you to activate the bonus feature. And once this happens, you will receive a number of freespins. The number of freespins is determined by the number of Scatters you landed. If you land the minimum of 3 fire alarms, you will get 10 freespins. 4 and 5 Scatters will give you 15 and 20 freespins, respectively. Once the feature begins, you will be aiming to collect as many Scatters as you can, as this will help you progress in the Bonus game building. Every three Scatter symbols that you collect will award you an extra 2 freespins and will unlock a new floor. All in all, there are 5 floors, so you can potentially gain up to 10 freespins on top. And better yet, once you unlock a new level, the lowest value symbol on these reels will become a Fire symbol. 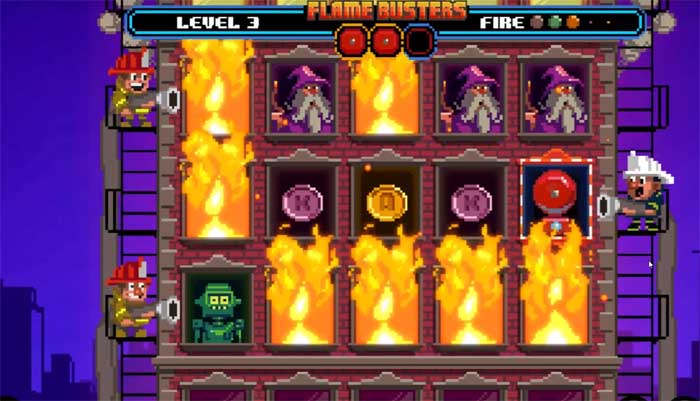 Flame Busters is kind of a stroke of genius, to be honest. And there’s a reason it’s so popular with players. It’s great fun having to play something so retro that we all remember and is a piece of our childhoods. Not to mention how rewarding this slot game can actually turn out to be due to its high volatility. But with that in mind, you would also do well to be careful it doesn’t eat up your bankroll. Payouts in this title can potentially reach up to a pretty satisfying 5,280 times your total stake.