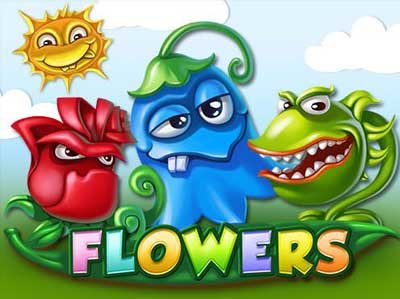 Flower is a slot machine powered by Netent, featuring flowers like you have probably never seen them before. They’re grumpy, goofy, freaky and some just seem plain unamused. You can definitely trust this software developer to create a brand new world filled with outlandish characters and a unique theme. So, from what you can tell in the setting, the slot takes you to a very unusual kind of garden. The wooden frames hold the reels together, and surrounding them is tall grass and leaves. There are small little buckets hanging down along the frames, marking the paylines. And the sounds here are certainly very garden-like. There are bugs buzzing, birds chirping and crickets somewhere in the distance. We’re also not quite sure, but we will assume that you can also hear frogs making noise, too. And that will be the soundtrack accompanying your gameplay, unless you would prefer to use the mute button instead. 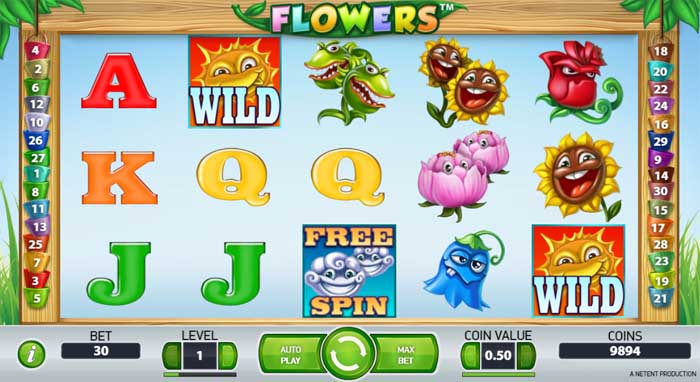 As for the symbols, they first start off with the more boring playing card symbols. These don’t specifically have any relevance to the theme, but they do come in very bright, flowery colors. The symbols here include A, K, Q and J. Then we have the quirky flower characters, of which there are five in total. They start off with the blue, skeptical looking harebells and the pink puffy peony. Moving on, there’s something that looks like a very angry Venus flytrap, after which is an extremely joyful sunflower. And finally is a pretty grumpy red rose. Maybe life as a flower isn’t all that blooming, after all. The layout in Flowers is pretty traditional, though, with 5 reels and 3 rows. The total number of available paylines is 30, but those are fixed. This means players won’t have the possibility of adjusting them. In addition, you can enjoy a fairly decent betting range spanning from 30p per spin up to £75 per round. And the RTP is at a fairly typical for Netent mark of 96.3%.

Before we introduce the special symbols in this title, there’s one remark we need to make about the regular icons. They can all appear as double symbols on the reels. This means that they will essentially take up a single position, but will act as two symbols of the same type. You will easily be able to distinguish them, as they will feature two flowers, instead of just one. That’s two grumpy roses, two happy sunflowers, etc. This is a great opportunity to land even bigger wins. 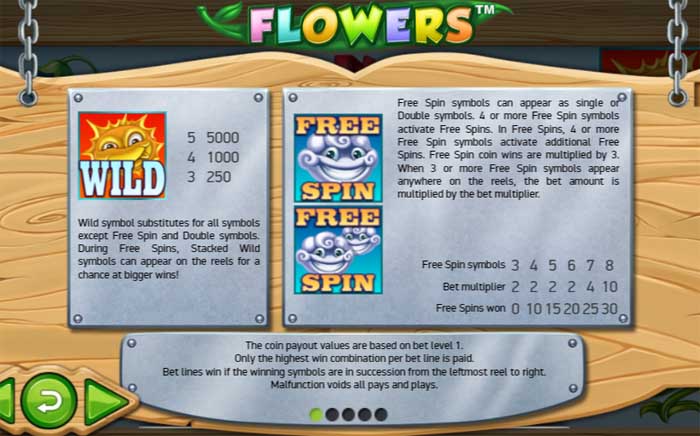 Now, as for the special symbols, let’s start off with the sun, which is the game’s Wild icon. It can appear in any position on the reels and it’s also the most lucrative icon in the game. Payouts here can reach up to a massive 5,000 coins. Furthermore, you can also land the Wild in stacks, making for even bigger potential wins. And on top of that it will replace any of the single symbols on the screen. This means that the Wild will not substitute for the double symbols. In addition to that, it will also not be able to replace the game’s Scatter symbol.

In turn, the Scatter depicts a grinning cloud, which can also appear as a double symbol or two grinning clouds. Unlike the Wild it can also land in any position on the screen. And in order for you to benefit from it as much as possible, you will be looking to land a minimum of 3 Scatters at the same time. 3 Scatter symbols will award you a 2x multiplier on your payouts. But landing 4 or more Scatters at the same time will not only give you a multiplier, but will also trigger the free spins bonus feature. 4, 5 or 6 Scatters will all award you a 2x multiplier and 10, 15 or 20 freespins, respectively. 7 Scatter symbols will grant you 25 freespins and a 4x multiplier. And last but not least, 8 Scatters will give you a total of 30 freespins and a 10x multiplier! Better yet, players can also retrigger the feature and gain additional freespins. All you have to do is land another 4 or more Scatter symbols during the same spin. 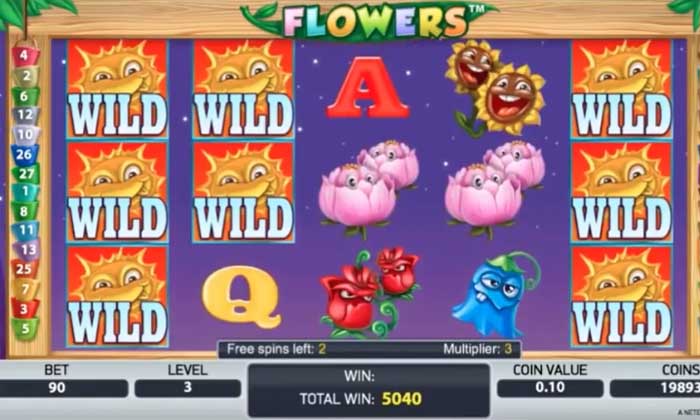 Flowers offers a new and unique theme, in addition to a fun setup and game structure. The double symbols feature brings a fresh new winning opportunity to the table, which we think is great. And on top of that, you also have the stacked Wilds that further add to the overall winning potential of this title. Naturally, the bonus feature here is where all the action is at. As a matter of fact, prizes here can soar up to a crazy £37,500 per spin. But you will need to be patient for wins like that to come your way.