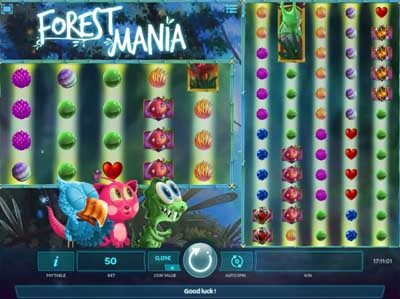 Brought to us by software manufacturer iSoftBet, Forest Mania is an enchanting, fairytale-like slot game. Pretty much everything about this slot game is as adorable as it is unusual. Set against a backdrop of the night sky and a leafy tree visible in the distance, the screen presents us not with one set, but with two sets of reels. And right in front of them are the stars of the show – the three little animated characters. Each comes in its own color and they are: a bird, a cat and a lizard. Keep an eye on them, because they will each play their role further on. The soundtrack here is really pleasant, too, in tune with the fun and playful theme.

As we already pointed out, the layout here is a bit different from the majority of modern day slots. There are two sets of reels here, as opposed to just one. The first one features 5 reels and 4 rows, whereas the second one also has 5 reels and a whopping 12 rows. This makes for a total amount of 100 paylines. Needless to say, those are not subject to adjustment. You can wager anywhere from 50p per spin up to a maximum of £50 per spin. And you can count on an average RTP of about 95.62%.

Forest Mania boasts its very own Wild symbol, which you will easily be able to spot. It comes in the shape of a coin-like icon with the letter W on it. As is custom for Wild symbols, it will be able to replace any of the other symbols to help create winning combos – no exceptions here. What’s more, you will also be able to land it basically in any position on the reels. It can appear both during the base and bonus games.

But in addition to that, one symbol can randomly be turned into a Wild on the first set of reels. Whenever this happens, it will transform all other symbols of that kind into Wilds across both sets of reels. Another random feature in this slot game is Wild Reels. Up to three full reels on the first grid can become fully Wild at random. The corresponding reels on the second grid will also then become fully Wild. 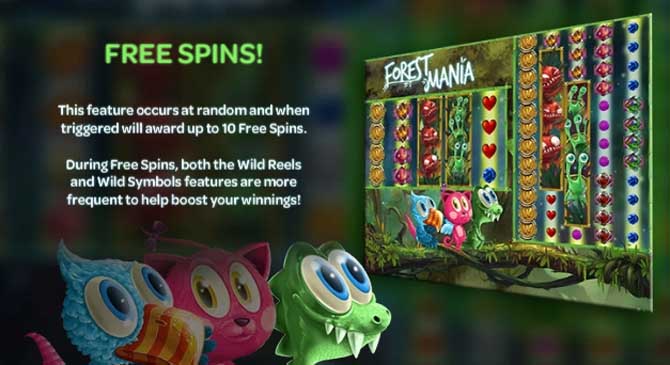 Last but not least, Forest Mania also boasts a freespins bonus feature, which is also randomly triggered. At any point during the game, you can receive up to a maximum of 10 freespins. What’s more, the above two random features can occur more frequently during the freespins. Thus, you will have the potential of gaining even more wins.

Forest Mania is a very sweet and fun online slot game that offers a slightly different kind of gameplay. The graphics and soundtrack are both of outstanding quality and contribute towards creating a compelling theme. It’s unusual that all features here are randomly triggered, but they do occur fairly often and can offer very decent wins.