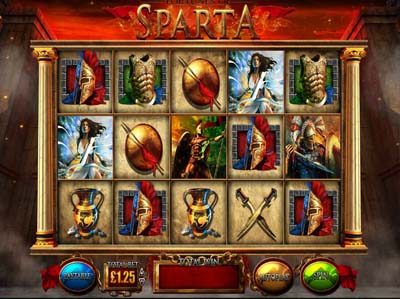 Fortunes of Sparta is a cool new slot from Blueprint Gaming. It centers on Sparta, obviously, and has an ancient Greek meets gladiators kind of theme. Fortunes of Sparta is visually very pleasing, providing players with outstanding graphics and finely detailed symbols on the reels. The sound effects are also a masterpiece of their own. They transport you into the realm of Spartacus, epic battles and all things ancient warfare. A bright red sky above the reels is a picturesque indication of the same. Furthermore, you will see explicit depictions of swords, shields, spears, helmets, armor and brutal warriors. Among them are also objects of beauty, such as a majestic temple and archaic vase. And finally, a beautiful lady clad in white might as well be the goddess of war herself.

Fortunes of Sparta also pleases with a number of different bonus features, which never hurts, either. First up is the most attractive Spartan Streak bonus feature. In order to trigger it, you will need to look out for the Wild Spartan Streak. It only appears on the middle reel and showcases the silhouette of a warrior against a fiery backdrop. Apart from looking rather impressive, it will also reward you accordingly.

When it appears on the middle reel, it will expand to take over all of it. After this, it then proceeds to trigger a respin, holding all winning symbols in place. Each time a new line win forms, the rest of the symbols will again respin. This will keep happening until finally no new winning lines appear anymore.

But there’s also another bonus feature in this game. It’s called the Spartan Spins feature and provides players with up to 100 freespins! The Bonus symbol responsible for activating the freespins feature can land anywhere on the reels. But to trigger the Spartan Spins you will be looking to land at least 3 at the same time. They will grant you 8 freespins to begin with, but the more you land – the more spins you get. Thus, for 4, 5, 6, 7, 8-9 Bonus symbols, you will receive 10, 12, 15, 20 and 50 freespins respectively. Finally, if you can land 10 Bonus symbols at once, you will receive the main prize of 100 freespins. 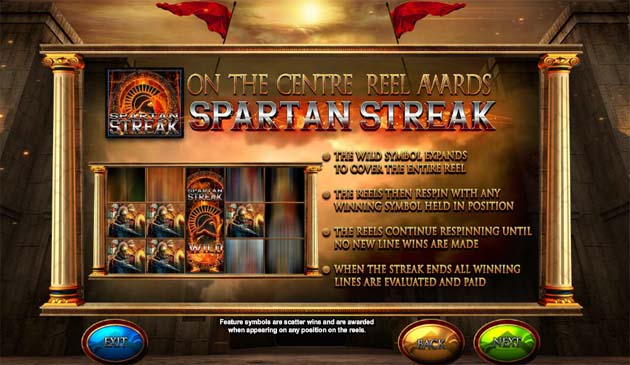 There’s also a catch to this bonus game, too. As you land Bonus symbols during the feature, they will stick in place and the rest will continue spinning. And in addition, the Spartan Streak will also remain fixed in place throughout the feature.

We enjoyed Fortunes of Sparta, mainly because of its truly superb graphics. But the unique bonus features are also something worthy of noting. What’s more, they can make for some very impressive winnings, which is ultimately what anyone ever wants from a slot game. The RTP is also very competitive, standing at 97.04%, a big reason to give this slot a go.