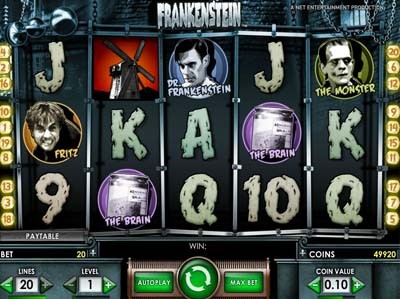 Everyone knows that Netent’s collaborations with Universal Studios are nothing short of genius, and the developer’s production of the Frankenstein game brings all the wonder of the classic horror film to your screen. The reels are filled with plentiful standard icons, those being A, J, K, Q, 9 and 10, with others that are more relative to the theme being inserted in elsewhere, including Frankenstein’s monster, the brain that is inserted into his head, the doctor himself, and the windmill from the film, amongst others. However, this is just the surface of this wonderful game, which has several amazingly incorporated extras.

The game offers up a five reel and three row layout, with a total of 20 customisable pay lines also integrated into it. The bet level can be changed between one and 10, while the coin value is also able to be switched between £0.01 and £0.50 per active line. This, therefore, allows players to place a maximum overall wager of £50.00 per spin, while the autoplay button allows for up to 1,000 consecutive spins of the reels at the same wager level.

The special features in this product are what really make it come to life, so to speak, with both a lightning wild and a fire wild included. The lightning version appears on reels two, three and four in the main game, and will send sparks flying across the reels to transform two or more nearby icons into wilds as well. The fire wilds appear on the same reels, but in freespins mode, and there’s a guaranteed fire wild with each of the freespins you have.

The windmill icon acts as this game’s scatter symbol, and three or more of these appearing on the reels will trigger the freespins round. During this round, two or more scatters showing up will provide five extra freespins, while three will provide 10 extra freespins. Furthermore, multipliers up to times five can appear on reel five.

Frankenstein provides a film-based game to slots players, which features unique and thematic extras to impress.