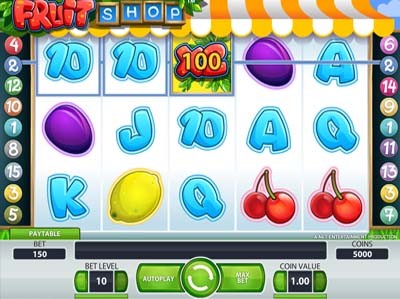 Someone has set up a stall selling fresh fruit, and they’re hoping to make a profit on it as well. That’s exactly what you’ll be wanting to make when you play this game from Netent. Obviously, with the game being called Fruit Shop, you’ll have a pretty good idea of what’s on its reels. Taking all those icons of traditional fruit machines and transferring them to a modern video slot with some added pizazz is what the developer has done here. So, therefore, you’ll find lemons, plums, cherries, watermelons and oranges have all been laid out, and the owner has picked only the best looking of the fruits to sell.

The product itself is presented on a five reel and three row layout, and a total of 15 fixed pay lines have been included alongside. Players are able to alter the coin value from its minimum of £0.01 up to its maximum of £1 per line, while the bet level can also be changed from one to 10. With this being the case, gamers are able to place a maximum overall wager of £150 per spin.

The game has a wild symbol included, which is its logo. This will stand in for any other icon on the reels in order to craft the highest possible win, and any wins incorporating this symbol will double your pay out.

This game may not be bursting at the seams with special features, but the selection it does have are exceptionally intriguing. Its graphically very pleasing and the incorporated music is not overpowering, but suits the product very well.