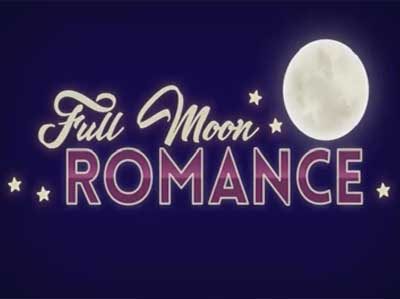 Full Moon Romance is yet another one of Thunderkick’s outstanding creations, boasting a lovely theme and amazing visuals. Here, the theme has more of a nostalgic feel to it, paying tribute to a popular activity of 1950’s – drive-in theaters. We have all seen it in movies: you take your fancy old-timer and drive straight to the movies and enjoy a great picture without even having to get out of the car. And since this was a common thing to do as a date – that is precisely the vibe we’re getting in this title. The reels are the big screen in this title, appropriately. And in the foreground you can see cars with cute couples in them lined up to see the film. And in the backdrop you can see the palm trees swaying ever so slightly, with the sun setting steadily behind them. 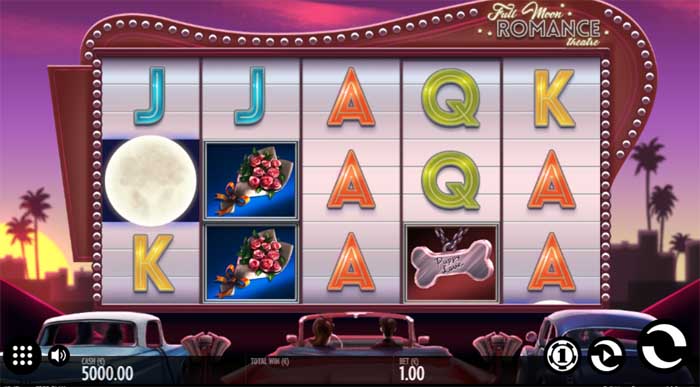 The symbols start with the less important icons. There are four of these in total and they nicely styled to cover the slot theme, also in very appropriate colors for that era. The symbols in question are A, K, Q and J. Then there are some vintage romantic icons as the payouts increase. These start off with a bouquet of pink roses, followed by a pendant in the shape of a doggy bone with ‘Puppy Love’ engraved in it. Next are two monster characters, as we know that the 50’s bred a bunch of classic horror films. And finally are the guy and the girl character symbols. As for the slot design in Full Moon Romance, it’s fairly traditional. It has 5 reels and 3 rows in total, with 15 paylines. These lines are static, though, so you will not be able to regulate them. And the potential betting amounts range from 10p per spin and reach up to £100 per single spin. In addition, there’s also a reasonable RTP of 96.1%.

Full Moon Romance also features its very own sparkly Wild symbol, which however doesn’t offer any payouts of its own. But it can land in pretty much any position on the reels, at any point during gameplay. And even more important it will also be able to stand in for any other slot symbols. That way the Wild can form better winning combinations and potentially boost your winnings. But the Wild cannot substitute for the game’s Scatter symbol. 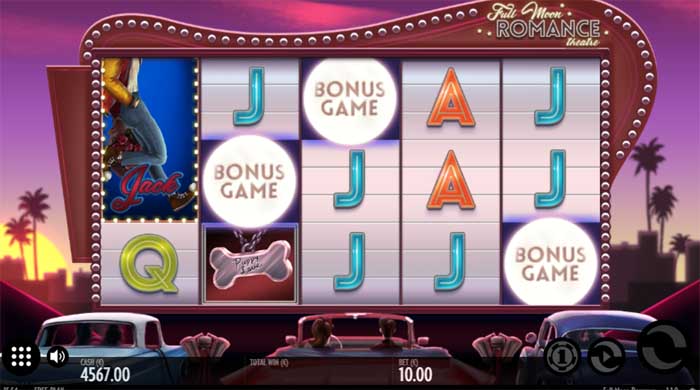 The Scatter, in turn, comes in the form of a full moon and it, too, can appear in any position, anywhere on the five reels. It won’t offer you any payouts of its own either, but it has an even better benefit to it. The Scatter can trigger this game’s freespins bonus feature. For this to happen, you need to land at least three Scatters at the same time during a spin. If you do this, you will receive a minimum of 10 freespins. The more Scatters you land, though, the more freespins you will get. So, 4 Scatters will give you 15 freespins. And finally 5 Scatter symbols will give you the maximum of 20 freespins. Better yet, you can also retrigger this feature and increase your freespins count. Just land another 3, 4 or 5 Scatter during the same spin. And as a result you can generate a total of up to 40 freespins in total. 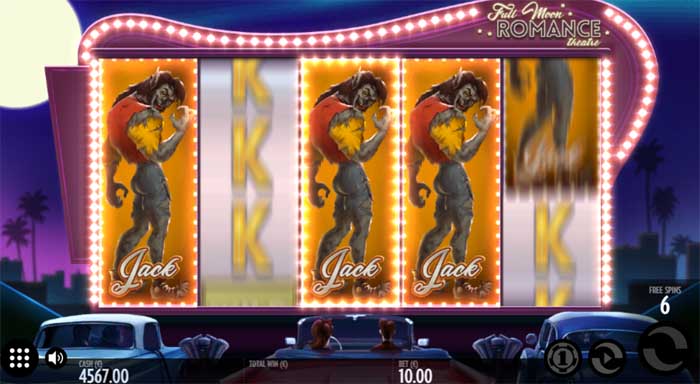 During the freespins round, you will notice that if any of the Sweetheart symbols appears on the reels (the guy or girl), they will turn into monsters. Or werewolves, whichever suits you better. And they will essentially count as the same symbol, ensuring even higher potential wins.

Note also the Clone feature that this online slot game boasts. It can become active at any point during the base game, whereas the only condition is that you land a Sweetheart symbol on the first reel. As a result, it can create up to 4 clones on the next reels. The clones don’t necessarily need to land on consecutive reels, though. They can appear on fully random reels.

Full Moon Romance is without doubt a very enjoyable online slot game. It has a uniquely pleasant theme, perfectly supported by the great visuals and graphics quality. Oddly enough for Thunderkick, gameplay is pretty traditional with a conventional bonus round and a couple of other neat extras. So the developers haven’t gone full-blown wild with trying to introduce a completely new structure. And that, too, is nice. In fact, we think it’s only fitting given the retro theme and all. We would place this title in the medium variance range, so you will get some pretty decent sized wins throughout gameplay. And you can also get a healthy chance of triggering the bonus round.