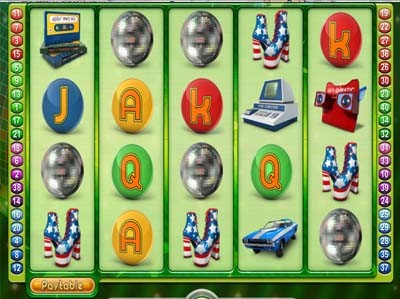 The seventies were a funky time, for sure, and that’s never clearer than in this game. Backed by a piece of music that would make Aretha Franklin turn green with envy, players will be able to spin through reels filled with platform shoes, the original huge home computers, disco balls, retro cars and cassette tapes, amongst others. The remaining icons are made up of the standard A, J, K and Q, and everything is designed in an exceptionally wonderful, nostalgic way.

There are five reels in this layout, and three rows, while a total of 40 pay lines have also been added. If you prefer, you can place wagers on less, as they are customisable. Furthermore, the coin value is able to be altered between £0.01 and £0.50 per active line. Finally, the game’s bet level is also able to be switched from one up to five. This will allow all players to place a maximum overall wager of £100 per round, should the active line be set to the full 40.

The game includes a wild symbol, which is represented by its own logo. This substitutes for all symbols, except for scatter icons. Each reel contains multiple wild symbols, which line up to create ‘Stacked Wilds’, and thereby offer more opportunities to create wins.

As for the scatter symbol, this is represented by the afro-haired lady, who you can just tell is getting her groove on to the beat of the disco music. Three of these appearing will pay out double your total bet placed, and will also trigger five freespins at the same time. Freespin wins are also doubled, and three further scatters appearing during this round will award five additional freespins.

The Funky Seventies will bring a strong sense of nostalgia back to you if you were alive at such a time. And even if you weren’t, it’s a beautifully designed game with a soundtrack that even the hardiest of modernists can’t turn down.