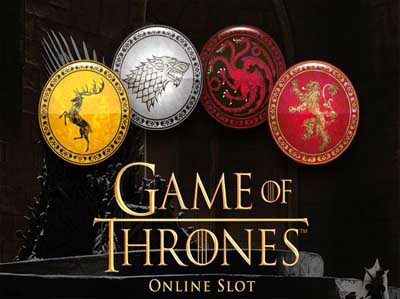 If you are among the millions of fans of the insanely popular HBO show Game of Thrones, then you have probably been waiting for this moment for a while now. And of course, who better to trust to make a slot game adaptation of a massive TV series like this than software developer Microgaming, So get ready to spin the reels to the epic soundtrack of one of the most violent, intriguing and merciless shows in the history of TV. The icons here don’t feature any of the GOT characters, though. And, frankly, given its reputation for killing them off every so often, why bother, right? But there’s plenty of relevant imagery, nonetheless, as you will soon see. We also really like the design here and think it’s very appropriate for the theme. 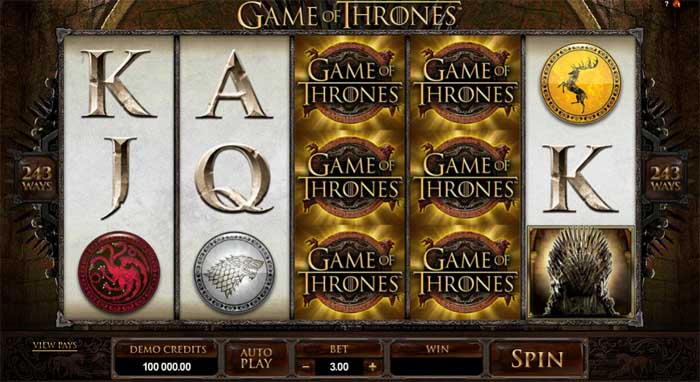 As for the symbols, we have the lower value symbols. These are all in the same color and styled accordingly. In fact, they look like they’ve been made of the razor sharp blades of swords. Be that as it may, the symbols in question are A, K, Q and J. This brings us over to the other four symbols on the screen – the higher value icons. These each represent the different houses that are battling each other to gain hold of the Iron Throne. First is the House Targaryen, featuring the three-headed dragon as its sigil. Then there’s House Stark, with the direwolf, following which is House Lannister with the lion as its sigil. Then last but not least is the black stag on a yellow background for House Baratheon. The layout in Game of Thrones features the common grid of 5 reels and 3 rows. And there are 243 ways to win, which means you cannot adjust paylines here. The available betting amounts, though, quite to our surprise are in a rather humble range. They span from 30p per spin up to £6 per single spin. And the RTP is also slightly underwhelming at barely 95%.

The Game of Thrones logo symbol acts as the game’s Wild. And as such, it will stand in for any of the other icons. There is one exception, though, and that is for the game’s Scatter. But aside from that, you can count on the Wild to help you create better winning combos. The Wild will be able to land in any position, anywhere on the 5 reels. In addition to that, it also happens to be the second most lucrative symbol in this game. And as if that weren’t enough, the Wild can also appear in stacks, making for even better winning opportunities.

The undisputable payouts champion on the reels, though, is the Scatter symbol. It depicts the iconic Iron Throne and can be worth up to 200 times your total stake. Better yet, it’s enough for you to land as few as only 2 Scatter symbols during the same spin and you will already receive a random cash prize. And just like its Wild counterpart, the Scatter symbol can land anywhere on the screen during gameplay. More importantly, however, it will be able to activate this slot’s single special feature – the Freespins Selection. To trigger it, you will need to land at least 3 Scatters at the same time during a spin. Of course, the more Scatter symbols you land, the higher the cash prize you will pocket.

So, once you’ve activated the feature, you will need to select one of 4 freespins features. First is the Baratheon feature, offering 8 freespins with a 5x multiplier. You can also get stacks of 3 House Baratheon symbols. Option two is the Lannister feature that provides a total of 10 freespins. In addition to that, all winnings will be subject to a 4x multiplier and you can benefit from 4 stacked Lannister sigil symbols.

The Stark feature, in turn, will award you a total of 14 freespins and a 3x multiplier on all winnings. Besides that, the House Stark sigil symbol can appear in stacks of 5. Finally is the Targaryen feature, offering 18 freespins and a 2x multiplier. The dragon sigil can appear in stack of 6 during these spins. And by landing a minimum of 3 Scatters during any of these features, you can retrigger it. Let’s also not forget the Gamble feature that can help spice up the base game and potentially increase your payouts.

Game of Thrones has become a cult show and it was only a matter of time before a slot game in its honor came out. And we’re happy that it was this developer that took the liberty of creating the title. The graphics are great and the design is very tasteful. But in addition to that, players get to enjoy exciting gameplay with a cool bonus round and good winning potential. This is one of the best slots Microgaming has ever made and great fun all over.