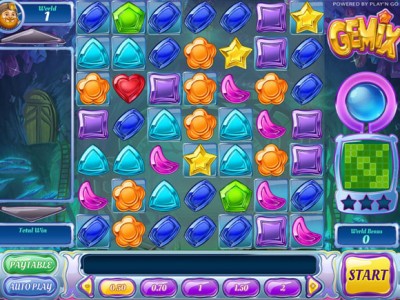 Gemix brings forth a wildly charged game, not dissimilar to the popular Bejewelled product. The reels are filled with various gemstones, each a different shape and colour, and as you play the game, you’re backed by a quirky piece of soundtrack music. The reels themselves are laid out in much the same way as a Bejewelled interface, so this one takes a step away from the standard five reel, three row product.

Instead, what you’ll get with Gemix is a seven reel, seven row layout to play on, and instead of specific paylines, you simply to need to match five or more of the same gemstone to create a win. The winning gems will then explode, allow the reels to fall and provide further stones, which in turn have the possibility to create another winning combination and continue the process. Wagers can be placed between £0.50 and £100 per spin.

One thing this game is not short on is extra features. First of all, you’ll see a column on the left hand side of the reels, which will mark off each of the winning combinations. The more gemstones included in the win, the higher the multiplier will be for it.

Every winning combination per spin will also fill up the Crystal Charge, which can be seen on the right. This will fill up completely after winning on 20 symbols, and after doing so, it will provide an extra, random feature on the reels. These are split into four different perks:

Such a slot game is a welcome addition to the vast catalogue available online, due to its unique layout and additional perks.