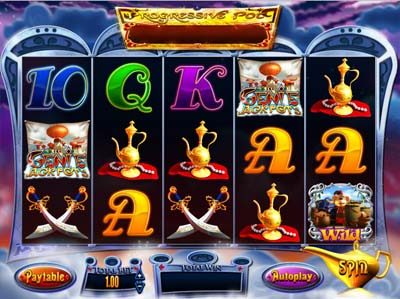 Genie Jackpots is a slot game by developer Blueprint Gaming, which centers on the famous story of Aladdin and the magic lamp. And we all know who was imprisoned in the magic lamp, right? That’s right, the wish-granting genie! So what better theme for a slot game? The graphics here are a bit on the cartoonish side with amusing representations of some of the main characters in the story. The developers have also included the lower value playing card symbols, styling them accordingly. They range from Ace to 10. As for the higher value symbols, they include a red turban, decorated with a large green gem, an antique Arabic teapot and two crossed swords. Finally, there is the mythical palace of Agrabah and a very comical depiction of Abu – Aladdin’s faithful friend and pet.

The layout features 5 reels, 3 rows and a total number of 20 paylines. Stake amounts in this game range from 20p per spin and up to £50 per spin. The RTP is a bit of an underwhelming 94%, however.

Abu, whom we already mentioned above, is the Wild symbol in Genie Jackpots. As such, he is capable of replacing any of the lesser value symbols on the reels to help create winning combinations. In addition to that, Abu is also the highest paying symbol on the reels offering payouts of up to 500 times your line bet. Not bad for a pet monkey. However, the Wild cannot replace the Bonus symbols.

There are a few kinds of Bonus symbols in this game. Reels 1 and 3 may reveal the regular green Bonus symbol, but watch out for reel 5. Depending on what you land there, in combination with the other two Bonus symbols, you will trigger one of the available features. If you land the Magic Carpet symbol on the fifth reel, this will trigger the Magic Carpet bonus. It, in turn, will offer you a selection of lamps to choose from. As you move along the carpets, you can reveal the Collect option. This will end the game and collect the prize you had so far. Other options include Advance, which will help you move further along the carpet trail, and Big Money. Big Money will give you the opportunity to wing large cash prizes of up to 1,000 times your stake.

Next is the Mystery Win Bonus. This feature can be triggered by landing the Treasure Chest symbol, along with the other 2 Bonus symbols. This will offer you a Pick Me game and opportunities to win cash prizes of up to 100x your stake. Last but not least is the 3 Wishes Power Spins random feature. It can award you one of 5 different special features, including the Progressive Jackpot.

Genie Jackpot is a fun game, rich with a variety of different bonuses and special features. The graphics may not be to everyone’s liking, but there truly are lucrative winning possibilities throughout the game.