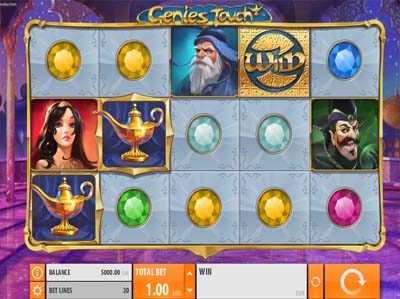 For a game with some very appealing Middle Eastern flavours, you should definitely try out the Genie’s Touch offering from Quickspin. Set out against a backdrop of a lavish palace room, it’s almost like you’ve been transported into Disney’s Aladdin animation. As such, you’ll find that there’s a nicely Arabic-influenced piece of music accompanying your game play, and the icons on the reels start with six different coloured gemstones – one baby blue, another navy blue, a green one, a pink one, a yellow one and finally, a red one. These are joined by four character icons, one of whom looks very much like the Aladdin character, while the other three exist in the form of a beautiful princess, an evil wizard and a good sultan.

There are five reels and three rows incorporated into this game, and Quickspin have added 20 separate pay lines alongside as well. These cannot be adjusted in any way, but you do have the ability to alter the wager that you play per spin. This is done by using either the up and down arrows next to the ‘Total Bet’ box, or simply by clicking on the box itself to view the range of bets available. You’re provided with options for bets between €0.20 and €100 per spin.

This game has also had a few special features included in it, starting with the wild icon. This will substitute for all other symbols on the reels, except the scatter icon, in order to make a winning payline. Should five of these appear on a pay line, you’ll will win the maximum pay out of 500 coins.

And you’ll also find that there’s a magic lamp icon on the reels as well. Three or more of them coming into view will trigger the Genie’s Touch Feature round. During this round, the magic lamp icon is active and an adjacent symbol is randomly selected. This will replace all other symbols to create the best possible win.

There’s also the bonus scatter icon, and when three of these appear on a single spin, you’ll be rewarded with 10 freespins. During this round, extra magic lamps are added to the reels.

For a theme that is as overworked as the Middle Eastern one is, this Quickspin offering is actually designed and presented in a more than appealing way, featuring high quality graphics and intriguing special features.