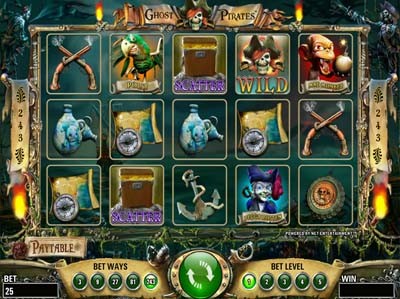 It’s great when a games developer takes two themes and merges them, which is exactly what Netent has done with Ghost Pirates. It takes on an almost ‘Pirates of the Caribbean’ type of a theme in all honesty, with the game’s logo demonstrating a similar font and design to that found in the films. However, its reels are filled with ultimately wonderful symbols, ranging from smoking guns through to maps with compasses, as well as cannons, anchors and bottles of grog. Four different character symbols exist in the game as well, starting with Peggy Rotten, before moving on to One-Eyed Ed, the Mad Monkey and Polly the parrot.

The game is made up of five reels and three rows worth of a layout, and Netent have also included 243 ways to win altogether. However, players can alter this around, with a selection of bet ways to be chosen from. These range from three, to nine, and onwards to 27, 81 and then finally 243. The coin value is alterable from its minimum of £0.01 up to its maximum of £0.50, while the bet level can be changed between one and five. Therefore, the highest overall wager that you’re able to place is £62.50 per spin.

The wild icon is that which is represented by the game’s logo. This will substitute for any other icon on the reels in order to make a winning combination.

Scatter icons are represented by the treasure chest, and three or more of these appearing anywhere on the reels will provide you with freespins. Depending upon the amount of ways to win you have activated, you’ll be given a different amount of freespins. This breaks down as follows:

All freespin wins are tripled.