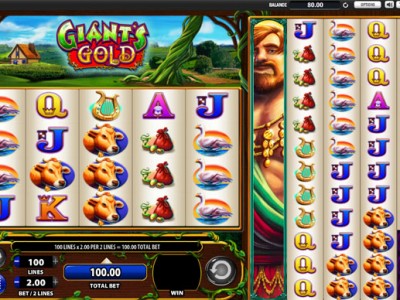 You’d think that a game about giants and their treasures would be a little more monstrous, but the moment you load this game up, you’re met with the sound of baaing sheep, clucking chickens and the yawns of a supposedly tired giant. Apart from these noises, there isn’t any other soundtrack, so be prepared to press that mute button in a fairly swift time.

The reels feature icons of certain animals, such as a swan and a cow, while others featured are of harps and magic beans, giving the idea that there’s a connection to Jack and the Beanstalk. There’s also stacked symbols of both a huge giant and his female compatriot. You’ll find two separate sets of reels, one with five reels and four rows and the other with five reels and 12 rows. Players can place wagers across the 100 lines of between £0.01 per two lines and £2.00 per two lines. This allows a maximum overall wager of £100.

The game has a wild symbol, represented by the aforementioned beanstalk. This acts as a substitute for any other symbol, except feature symbols, to create a winning combination.

There’s also a scatter feature symbol, which is shown by a golden egg. These only appear on reels one, three and five of both the main reel and the colossal reel set. Three or more of these symbols appearing scattered across three or more reels on both reel sets will trigger the freespins feature. Spinning three symbols will provide five freespins, while any additional feature symbol awards an additional freespin. Should you spin 40 or more feature symbols, you’ll be granted 100 freespins. Paylines on the colossal reel will pay out double during this round.