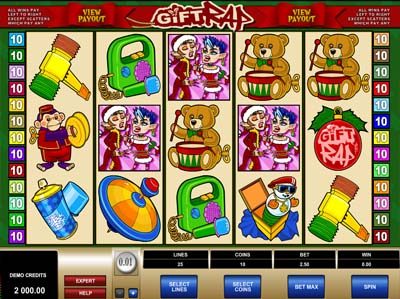 What do you get when you blend the Christmas period with rap music? Well theoretically, this game should be what you receive, although it seems as though punk music has been blended in to it instead. The reels of this game are filled with various different icons, starting with gifts that have been created to give to the nice children. These exist in the form of a plastic mallet, a spinning top, a green radio complete with microphone, a teddy bear with a drum, and a monkey toy with cymbals. There are three elf character icons as well, which exist in the form of two female punk rockers singing together, as well as two separate male elf icons.

These icons appear on a five reel and three row layout, which has also had a total of 25 separate pay lines included in it. However, you do have the chance to adjust these in one way or another, to suit your own personal preferences. You can also switch around the amount of the wager you place per spin, and this is done firstly by altering the value of a single coin. A range of between $0.01 and $1 can be chosen from, while the amount of coins that you can bet per active line is changeable between one and 10. Therefore, a maximum overall wager of $250 per spin can be played.

In order to bring some more entertainment to this game, you’ll find that Microgaming have included a wild symbol in it. This is represented by the Christmas bauble, and as a wild it will substitute for all other icons on the reels in order to form a winning combination. The only exceptions to this rule are the scatter and bonus icons.

And speaking of the scatter, this is represented by the sprayable snow in an aerosol. The scatter offers a pay out wherever it shows up on the reels and five of them appearing will multiply your total wager by times 80.

Finally, there’s the inclusion of the bonus symbol, represented by the jack frost in a box. Should three, four or five of these show up in scattered locations on the reels, you’ll trigger the ‘Gift Grab’ bonus round. This round is able to present you with a separate screen of various objects. You need to click on these in order to reveal random bonus win amounts. There are 30 different items to choose from, and the round continues until you reveal Jack Frost.

Gift Rap is one of the more overlooked Microgaming products, but we’re of the opinion that it should be played by everyone. It’s very entertaining, even though the actual rapping theme seems to have become a little lost in translation. However, its special features are very entertaining on the whole.