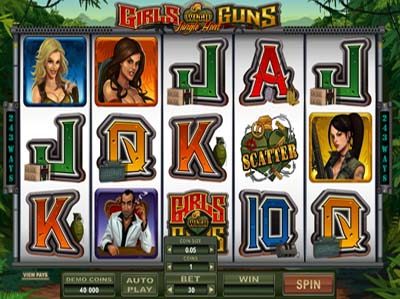 Girls with Guns is a very intriguing game series from Microgaming, and this one tells the story of several army ladies with big weapons heading into the heat of the jungle to take down their enemies. As such, you’ll be presented with a game which is set within the leafy green forest, and which also features an adventurous soundtrack to keep you fully compelled on your game play. The symbols of the game start with the A, J, K, Q and 10 icons, which have all been adorned with various different weapons and ammunitions. In addition, there are three icons of the villains in the form of two hit men, the boss of the enemy and their base camp. Finally, the six higher paying icons are presented by six different army girls and their guns.

There’s a total of five reels and three rows worth of a layout included in the layout of this game, while Microgaming have also added a total of 243 ways to win as well. This is not something that you’re able to alter in any way, but all players have the opportunity to change their wager placed per round, which is done first of all by switching around the coin value. This starts from a minimum of £0.01 and increases up to £0.05. Meanwhile, you can also adjust the amount of these coins that you play as well, and this is changeable between one and 20. This allows a maximum overall wager of £600 to be placed.

As far as the game’s special features are concerned, you will be able to see that a wild icon has been added to it. This is represented by the game’s logo, and these stand in for any other icon on the reels, except for the scatters. The wilds also show up in stacked format as well, meaning that you have the chance to form several wins in one go.

There’s also a special wild included in the game, and this is represented by the icon of the outline of some of the army girls. This works in the same way as the standard wild, substituting for other symbols except for the scatters, but it only shows up on reel three. If it does, it can also expand to make the entire reel wild as well.

The scatter symbol which has been added is represented by the heart-shaped grenade. As a scatter it will pay out wherever it shows up on the reels, and if five make an appearance anywhere, you have the chance to receive a maximum pay out of 60,000 coins. Furthermore, three or more of these showing up will trigger a total of 15 freespins. On each freespin, a random reel is turned completely wild.

As a game based on army girls, this one actually entertains players to the maximum. It has various special features that ensure you have a thrilling round of game play as well as high quality graphics on the whole.