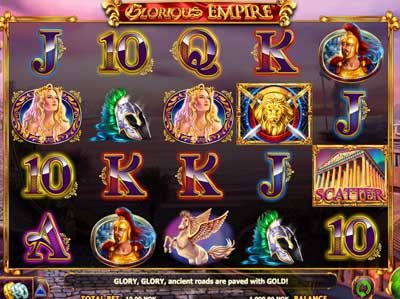 Glorious Empire is an online slot by one of the world’s leading game developers out there – NextGen Gaming. It’s a very nice slot, providing high-quality graphics and a majestic soundtrack to match the general theme. The reels are equally majestic and glorious as the name of the game would suggest. To begin with, you will see rather exquisite depictions of the regular playing card symbols A, K, Q, J and 10. Next is a brilliant helmet and a two-wheel battle carriage with a gold ram on it. After them is Pegasus – the magnificent winged horse. And finally are the depictions of a Roman soldier and a beautiful young maiden.

The game has 5 reels and 4 rows, with a total of 40 paylines. You can bet anywhere from 50p all the way up to £500 per spin. It also has a rather high RTP of near 97% and is regarded as a medium to high variance slot.

There is a lovely Wild symbol in this game, represented by a luxurious shield with a gold lion on it. It can replace any of the other symbols, except for the game’s Scatter. It, in turn, shows a lush palace with tall columns.

As the Scatter, it is of course also the highest paying symbol. However, if you can land three or more of a kind anywhere on the reels, you will trigger the game’s freespins bonus feature. 3 Scatter symbols on the reels will award you 7 freespins, whereas 4 Scatters will grant you 10. And finally, landing 5 Scatter symbols will get you a total of 15 freespins

What’s more, during the freespins feature, any Wild symbol that you land will remain in place throughout the duration of the feature. This can potentially contribute greatly towards accumulating larger wins.

Another nice touch to this slot is the Gamble feature. It offers a convenient side game that can allow you to double your prize, every time you spin a winning combination. You can choose to either collect your winning or make use of the feature by selecting the respective button. It will appear just above the Spin button.

If you do click on it, a new screen will provide you with a deck of cards. It will be up to you to correctly guess the color of the top card. The choice between black and red gives you a 50/50 chance to double your wins. If you are right, you may move on to the next attempt for the opportunity to further multiply your winnings. However, if you lose, you will lose all the winnings you’ve accumulated to that point.

Glorious Empire is a really pleasant slot and definitely does its renowned makers justice. Aside from being very satisfying visually, the game offers some nice winning possibilities. The Gamble feature can also always come to the aid of the freespins bonus feature, making for even more wins. It is no secret that we are a big fan of the sticky wilds feature in the free spins, and this slot is no exception. If you are lucky and land several wild symbols early on in the feature, you are almost guaranteed a really good win as they stick throughout the bonus feature. A RTP of almost 97% is also a above average, and a big reason why we give this slot such a high rating.