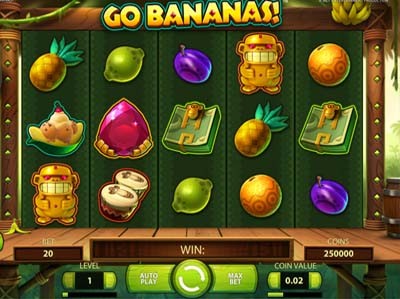 NeoTV is in the heart of the rainforest – and is about to be catapulted with a banana! Or at least, that’s what the introductory video package of this game from Netent suggests. Following the short media intro, you’ll be taken to the reels of the game, which feature various different tasty treats that a monkey might just indulge in eating. Some of these can be found within rainforests, for example fruits like pineapples, oranges and plums, while others aren’t so readily available to them, take for example the huge banana split. There’s also a selection of additional icons, including bongo drums and a huge red ruby, and these will all spin whilst a fairly tropical sounding piece of music plays along.

A total of five reels and three rows exist within the game, while Netent have also added 20 separate pay lines. These are fixed as they are, while the coin value and bet level can be changed. The amount you’re able to wager per line starts from a minimum of £0.01 and can be raised to £1.00, while the level is changeable from one to 10. Therefore, a maximum overall wager of £200 per round can be placed.

The wild symbol which has been incorporated into this game will substitute for all other icons on the reels to provide the highest possible winning combination on a bet line. This will only become visible when activated by ‘Wild Monkey’ symbols.

These particular symbols are represented by various different primates, and each have different effects on the reels. They turn themselves and some adjacent symbols into wilds. The bigger the monkey, the bigger the amount of icons will be changed, so the Wild Gorilla alters five, the Wild Orangutan alters four, the Wild Baboon and Langur changes three around, and the Tarsier switches two.