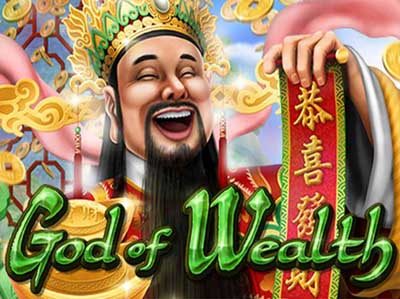 God of Wealth is an online slot game by online slot machine developer Realtime Gaming. This is an Asian themed offering, centering on the Chinese god of wealth – Caishen. He is one of the most popular Chinese deities, and no wonder, since he can gift riches to his followers. Likewise, in this title you will be seeing plenty of fortune in various shapes and sizes. Some come in the form of gold coins, whereas others are pieces of fruit and beans. Fortune cookies are also present below the reels, if you have a closer look. As for the backdrop here, it shows us some magnificent scenery of tall mountains and part of a temple. There’s a pleasant soundtrack playing in the background, too. And if you happen to land Caishen himself on these reels, you will hear his booming laughter. The overall quality of the visuals is also quite satisfying, with decent animated sequences here and there. 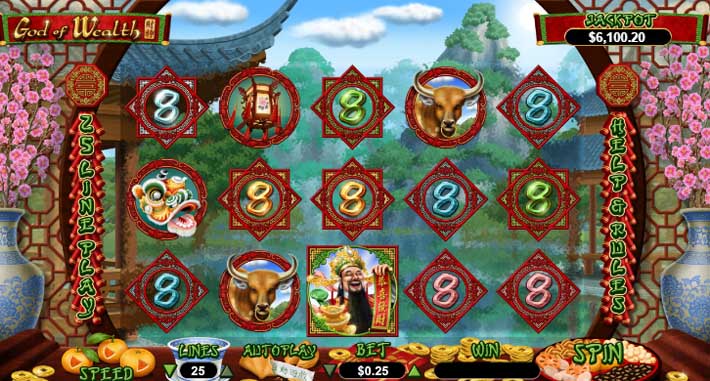 As for the symbols here, the lower value ones are quite interesting and not like anything you’ve seen in other slot games. They all come in the form of the number 8, which we know has a special significance in Chinese culture. There are six of them in total, forming two value categories with three symbols in each. To help you distinguish them, they come in different colors: blue, orange, pink, silver, gold and green. Next in line are the higher value icons, starting with the dragon mask and the lantern symbols. After that, there’s a water buffalo symbol, following which we have an icon depicting a tiger. And last but not least we have the green dragon symbol that appears to be almost tying itself in a knot. The layout in God of Wealth is pretty conventional, though, featuring 5 reels and 3 rows. There are 25 available paylines in total, but you can also adjust these with the help of the up and down arrows below the reels. Similar controls are also present to regulate your betting amount. And stakes here span from a minimum of 25c per spin up to a total of $6.25 per single spin.

One of the symbols you will really want to look out for here is the God of Wealth symbol. He acts as the game’s Wild and will be able to appear only on the middle (third) reel on the screen during the base game. Furthermore, as a Wild, he will also be able to replace any of the other symbols and, thus, help complete winning combinations. Better yet, the Wild is also the most lucrative icon in this entire offering, with payouts soaring up to 10,000 coins. And if that weren’t enough for you already, the God of Wealth Wild will also be able to double the payouts for any winning combination it takes part in! However, keep in mind that it will not be able to substitute for the Gold Ingot symbol. 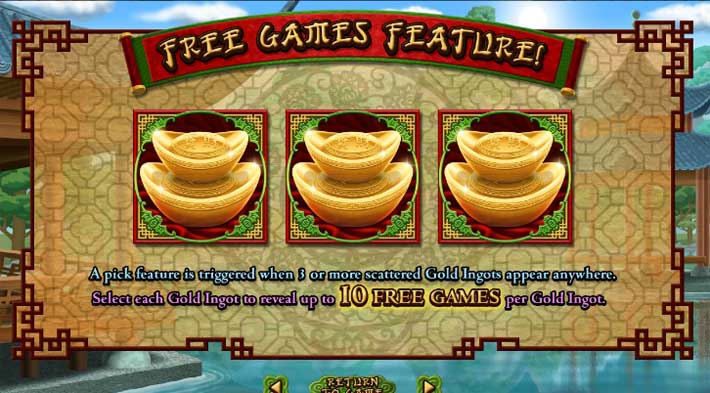 However, before the freespins actually begin, you will be offered a selection of three Gold Ingot symbols. Pick one in order to reveal the number of freespins you will receive, which can be up to a maximum of 10. During the freesspins round, the God of Wealth symbol will be able to appear in any position, on any of the five reels. But keep an eye out for him landing on the middle reel again. If this happens, the Wild will turn any Dragon, Tiger or Buffalo symbol on the screen into a Wild, as well. Thus, your winning potential will increase dramatically. Furthermore, the Gold Ingot symbols will also be present during the bonus round. And you will be able to take advantage of them in order to retrigger the freespins feature. 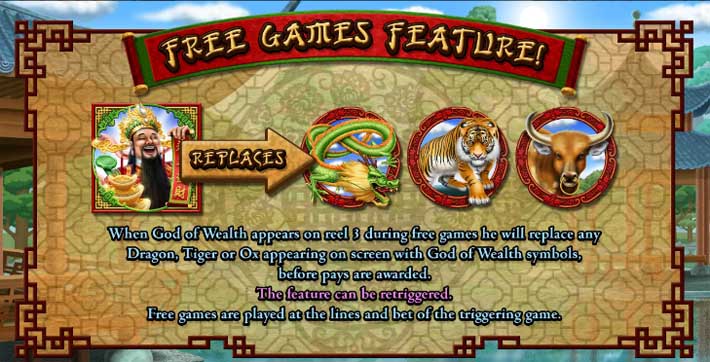 Note that this slot machine also boasts a Progressive Jackpot, which you can monitor on the main screen. Like with most RTG Progressives, this one is awarded randomly after the completion of any spin.

God of Wealth is a very decent offering by software developer RTG. We found the visuals to be of good quality and the design was able to capture the better side of a Chinese theme, as opposed to the more common red-and-gold royal palaces. We should also point out that this is a fairly volatile title. So, triggering the bonus round won’t necessarily come easy. But once you do, the rewards from it will certainly prove worth the wait. Just be sure to call on your bankroll managing skills.