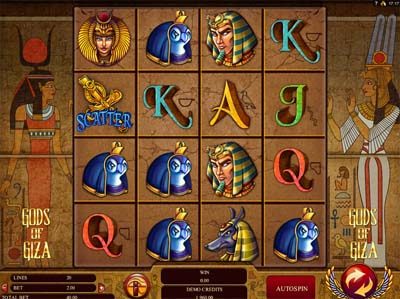 You don’t need to read any further than the title of this game to understand what it’s all about. Ancient Egypt is once again on the cards. It may feel fairly repetitive, but this slot machine from Genesis Gaming brings a whole new outlook on both the theme and on video slots in general. As such, it is set against a backdrop of temple paintings, while the reels of the game include various different Egyptian-themed icons. So, you’ll be able to spin your way through incarnations of Pharaohs, Horus, and one or two other deities from the culture. These have all been designed in wonderfully animated graphic forms.

Where this one differs to most other online video slots in the first instance is with its interface. This provides four reels and four rows worth of a layout, while a total of 20 different pay lines have also been added. These are not customisable, so you are unable to alter them around. However, you do have the chance to alter your bet around with the plus and minus buttons. This starts from its minimum of £0.01 and raises up to £10, thereby providing a maximum overall wager possibility of £200 per spin.

There is a scatter icon included in this game, which is represented by the image of the ankh. This will pay out in any position, and if three or more of these appear during the base game, you’ll trigger eight freespins. During this round, after every freespin, the reel window will rotate 90 degrees. Line wins will be re-evaluated after the rotation, and it will turn 90 degrees a total of four times for each freespin.

There is also a wild icon included in the game, which is represented by the scarab beetle with wings. This will substitute for any of the other icons on the reels, with the exception of scatters. Should four of these appear on a pay line, you’ll be rewarded with up to £250 as a pay out.

For a frequently pushed theme, Gods of Giza offers up a twist on the regular gaming layout and features specialities to make your game play a lot more interesting.