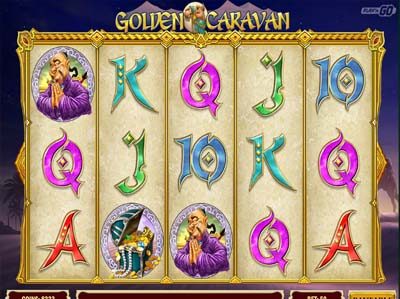 If, like us, you’re a fan of games that are based on historical reality, then perhaps the Golden Caravan offering from Play’n Go will be to your liking. This tells the story of Marco Polo and his adventures to discover vast treasures in the Eastern lands. As such, it will take you right into the desert lands of Asia, and it features reels that have been filled with the regular A, J, K, Q and 10 symbols in the first instance. These are joined by the more thematically relevant additions of a desert oasis, a blue treasure chest filled with gold and trinkets and a Mongolian priest.

The game takes place on a five reel and three row layout, and Play’n Go have also included a total of 10 different pay lines as well. These can be adjusted with the arrows at either side of the ‘Lines’ box, and players can also adjust the value of the wager that is placed per spin. This is done by altering the value of a single coin between £0.01 and £1, while the amount of coins played per line is adjustable between one and five. This allows a maximum overall wager of £50 per spin to be played.

The game offers up a couple of different specialities, starting with an icon of a camel, and this presents you with its scatter symbol. This will pay out wherever it shows up on the reels, and whenever you spin three in to view, you’ll trigger the freespins round. This gives you 10 freespins of the reels, and the round features multiplied winnings. Not only that, but the camel icon will also act as a wild during this round, substituting for all other icons on the reels.

Secondly, and finally, Marco Polo is present on the reels as well, and he is the game’s wild icon during the base round, standing in for all other icons in order to form a winning combination, with the exception of camel scatters.

Golden Caravan certainly has a nice theme behind it, but when playing it, one feels that Play’n Go could have done a little more in terms of special features. However, the graphics are great and so is the overall game play.