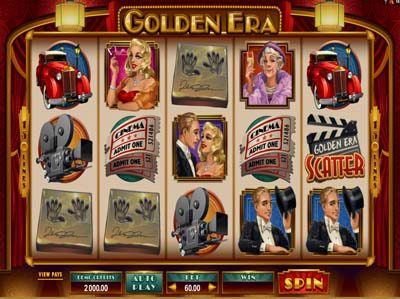 What comes to mind when you think of the Golden Era? Why, classic films, of course! When you look back to those old classic Hollywood movies, it’s clear that something special was in action when they were being made. Such films are brought back to life in this wonderful slot machine from Microgaming. As such, players are presented with various different icons. These exist in the form of cinema tickets, film reels and Hollywood walk of fame hand prints. There’s also a video camera, an award and a flashy, red car. The remaining five icons are of actors, actresses and a photographer.

Microgaming offer this game up on a five reel and three row interface. The developer has also made sure to add 15 pay lines to the slot machine. You are not able to change the amount of lines you play in Golden Era, but all players can change around the value of the wager that they play. You change this by using the arrow buttons next to the ‘Bet’ box. With this, you can select a wager of between £0,3 and £300 per spin. There is also an ‘Auto Play’ button in the game as well.

Visiting the Golden Era will also allow you to take advantage of some specialities, starting with a wild icon. This is represented by the game’s own logo. Functioning as a wild, it stands in for any other icon on the reels, forming a win. The only exception to this rule is the scatter symbol.

And speaking of the scatter icon, this is represented by the movie clapperboard. As a scatter, it provides a pay out no matter where it lands on the reels. If three, four or five of these come into view, they trigger the bonus selection round. This allows you to choose either freespins with embracing wilds or the double feature bonus.

If you choose the former option, you receive 12 freespins. The embracing wild reels move on each spin, starting from reels one and five. They move on to reels two and four, then embrace on reel three. If you choose the double feature bonus, you are presented with movie posters. In this round, you can pick up to 10 movies to receive coins.

We always enjoy taking a look back at the vintage film era. If you’re of the same mind, this game is certainly for you.