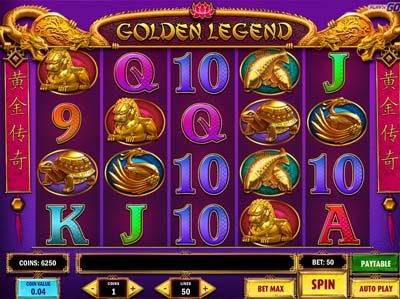 Golden Legend is a Chinese-themed slot game by software manufacturer Play’n Go. Asian themed slot machines are a dime a dozen and usually don’t baffle with their graphics quality, but this one looks surprisingly good. The graphics are pretty decent and color scheme choices aren’t as stereotypical. In fact, the purple background makes the golden dragons and other golden symbols pop out very nicely. Even the soundtrack is pleasant and not nearly as primitive as many slots sharing the same theme tend to be. There are plenty of symbols in this slot, starting with the lower value playing card symbols. They each have a separate color and range from A to K, Q, J, 10 and 9. Following them is a series of golden animal representations: fish, bird, turtle, lion and tiger.

The layout of Golden Legend features 5 reels and 3 rows. Players have substantial flexibility here, as they can regulate the number of paylines and set it anywhere from 1 to 50. The coin value is also subject to adjustment and you can bet with as little as 1p per spin. The RTP is 96.5%.

The game features a Wild symbol in the form of a Gold Sycee. It can appear anywhere on the reels and substitute for any of the regular symbols to help create winning combinations. However, it only cannot replace the Scatter symbol. 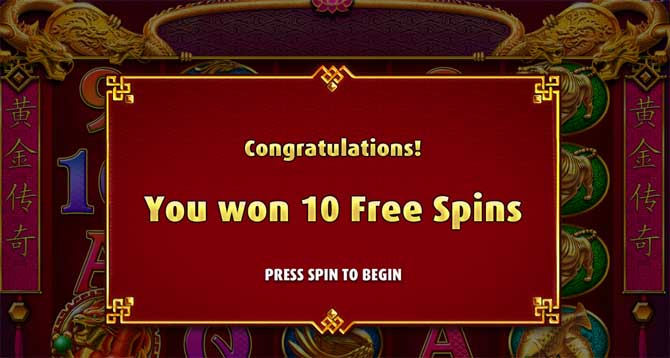 And the Scatter is the real star of the show here. That’s the symbol you will really want to look out for and it comes in the shape of a flamboyant Chinese dragon. It can appear anywhere on the reels and you will need to land at least 3 of them in any position in order to activate the Freespins feature. As a result, you will receive 10 freespins. But – there’s more.

For each of those 10 freespins, 2 Wild symbols will be added to reels 2, 3, 4 and 5. In addition, the Wilds will appear in stacks, which means the stacks will grow as the feature continues. What’s great is that you also have the opportunity of retriggering this feature. However, you can only do so once. In order to do so, you will again need to land 3 Scatter symbols at the same time. They will once again reward you an additional 10 freespins for a total number of 20 freespins. Note, though, that during the freespins bonus feature the Scatter will only appear on reels 1, 2 and 3. The freespins feature can prove to be quite lucrative with a maximum payout possibility of up to 10,000 times your stake. 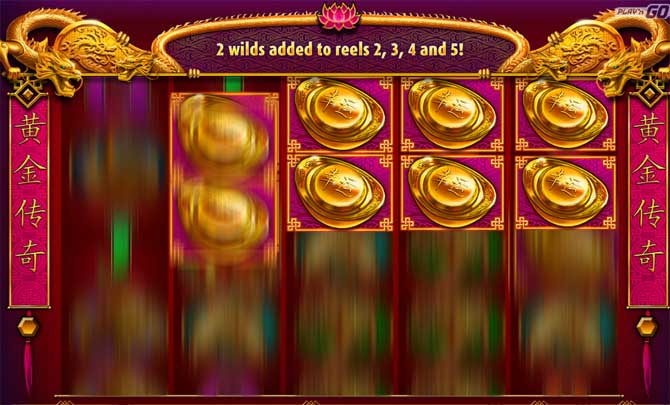 Golden Legend is visually very pleasant, but it doesn’t really have all that much to offer in terms of bonus feature variety. However, this is a medium to high variance game, so that single bonus feature could potentially be worthwhile. The adding of wilds during each free spin in the bonus feature is a great addition to the game making the last few free spins of each feature really exciting. Nothing like filling up the reels with wilds on the last spin! The RTP of 96.50% is typical for Play’n GO slots and pretty decent in our opinion. All things considered Golden Legend is a very well made slot machine and well worth a try.