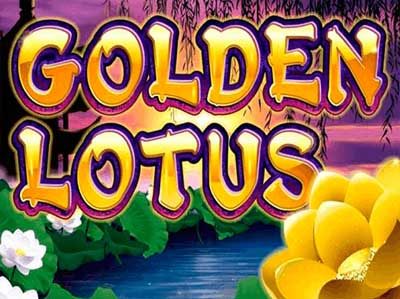 Golden Lotus is an Asian themed online slot game brought to you by software manufacturer RTG. It has a beautiful and very unusual for this genre backdrop. If you’ve been playing similar slots before, you have probably grown used to the opulent red and gold colors or the bright festive themes. Here, things are a lot more subtle. The setting shows either a very early sunrise or a very late sunset, when the sun is but barely visible. There’s a large willow tree, with its wiry branches hanging down above the reels. And to the left on the screen you can see the roof of a traditional temple. The graphics in this title, however, aren’t of the finest or latest quality. They aren’t 3D or HD, and that’s ok because it’s not a new slot game either. We did think it’s a shame that the offering lacks a real soundtrack, though, which could have greatly contributed to the ambience. 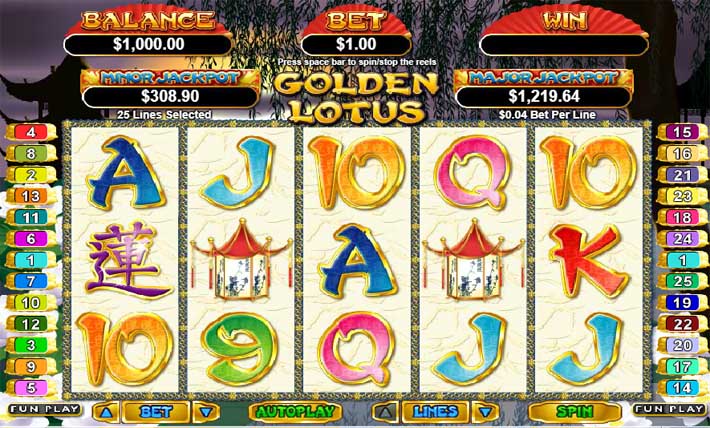 The symbols in Golden Lotus firstly have some lower valuable icons. Typically, these come in different bright colors, but they complement the slot theme nicely. The symbols in question are A, K, Q, J, 10 and 9. Next in line is a blue vase symbol, following which is an icon depicting a Chinese lantern. After that we also have a green Chinese guardian lion. Then there’s an increase in value for the young woman in traditional dress, holding a blue paper fan. Last but not least is a Chinese hieroglyphic, which is the most valuable icon. With its help you can gain up to a whopping 8,888 coins. As far as the layout goes, it features the common grid of 5 reels and 3 rows. There are 25 paylines in total, whereas you can also adjust those and play with less. This makes for a betting range of between 25c per spin and $6.25 per single spin. To regulate the stakes and number of paylines use the arrows below the reels.

Watch out for the Golden Lotus symbol, as it is the Wild. In addition to that, it is just as rewarding in terms of its payouts as the Chinese hieroglyphic. More importantly, though, the Wild will be able to substitute for any of the other symbols on these reels, as any Wild should. It can show up on any reel position. However, the Wild will not be able to replace just a single symbol – the game’s Scatter.

A White Lotus symbol represents the game’s Scatter. And while it’s nowhere near as lucrative as the Wild or some of the other regular symbols even, you will still want to keep an eye out for it. The Scatter will be able to trigger one of this title’s two special features – the White Lotus freespins bonus. Land three or more of these icons anywhere on the reels during a spin, and this will activate the feature. As a result, you will receive a total of 8 freespins.

All throughout their duration, you will benefit from a random multiplier of 3x, 4x or 5x on every spin. And on top of that, every time you land a White Lotus Scatter, it will transform into a Golden Lotus Wild or Hieroglyphic symbol. You can also retrigger this feature by landing 3 or more Golden Lotus symbols during the same spin. This will give you another 8 freespins on top.

The second feature this title has in store for you is the Chinese Garden feature. And in order to trigger it, you will need to land three or more Golden Lotus Wilds anywhere on the screen during the base game. This will take you to a new screen with 8 Golden Lotuses, and you will need to select four of them. Each one can award you a cash prize of up to 100x your stake or freespins. The freespins can be 5, 10, 15 or 20. In addition, they will come with a 3x multiplier on all freespins winnings. And on top of that, just like in the previous feature, all White Lotus symbols will become Wild or Hieroglyphics. You can even also retrigger this feature by landing another 3, 4 or 5 Wilds at the same time.

Golden Lotus is a great offering by RTG that has plenty to entertain players with. There are two whole special features, instead of the more typical for this provider single feature. On top of that, there is also the Progressive Jackpot to aim for. All in all, this is a great medium variance online slot game with very good winning opportunities. Of course, the bigger prizes will be coming from the special features, mainly thanks to the multipliers.