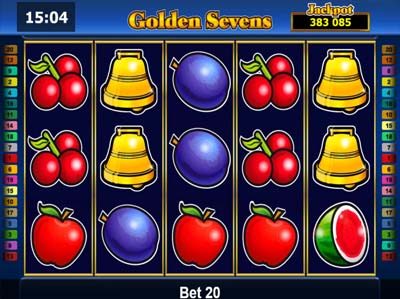 Golden Sevens is an old school kind of slot game, featuring all the most characteristic symbols of your typical one arm bandit. This game is brought to us by the Austrian developer Novomatic and doesn’t really shine with sophistication. Then again, the theme would imply a more simplistic approach anyway. There’s not much to say about the backdrop or overall design. There’s a lighter blue color in the back of the screen, whereas the reels themselves are painted in a darker shade of blue. It does make the symbols stand out better against the dark reels, though. And speaking of symbols, here they start off with the lower value lemons, plums and cherries and make their way up past the apples, watermelons and the golden bell. Finally, the red number 7 is the highest paying symbol on these reels. The soundtrack is very reminiscent of that in retro slot machines, but at the same time is also the typical Novomatic sound you will hear in most other games by this particular developer.

The layout here is pretty standard for modern day slots, featuring 5 reels and 3 rows. The total number of paylines in the game is 20, but you can select to play with less in the game settings. As far as betting amounts go, they range from 20p per spin and up to £80 per spin. As Novomatic slots rarely tend to differ from one another in their basics, the RTP on this slot machine is around the familiar 95.1%.

Golden Sevens is true to its retro theme, so don’t expect to see any special symbols like Wilds or Scatters. Instead, this game features a progressive jackpot, which is also its main attraction. You can monitor the amount you will be aiming for at the top of the screen. 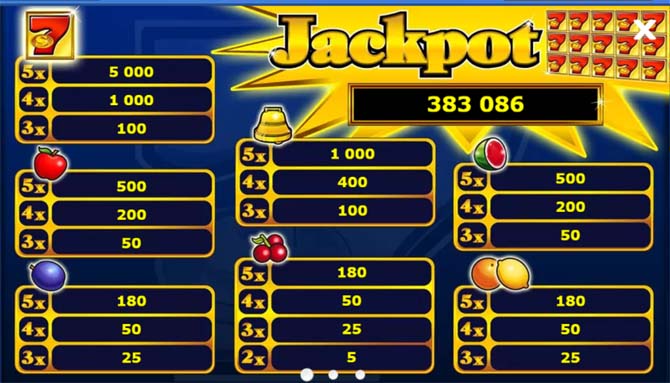 In order to hit the progressive jackpot, though, you will need to keep an eye out for the Golden Sevens symbols, as the title would suggest. These symbols can appear stacked on the reels. But you will need to fill the entire screen with them, in order to win the big bucks.

The only other extra that Golden Sevens has to offer is the Gamble feature. It will offer you the opportunity to double your prize, up to several times even, after any winning spin. After you have landed a winning combination, you can either collect your win or gamble it. The side game is double or nothing, so do be careful when attempting to play. The setup is overly simple. All you have to do is choose to either collect or gamble and the rest will happen on its own.

Golden Sevens is an extremely simple and basic slot game. It mimics the way vintage slot machines are set up and that may be very appealing to certain players. In fact, it looks a lot like a very old game itself, even though it’s relatively new. The progressive jackpot is obviously what most will be aiming for when playing this game.