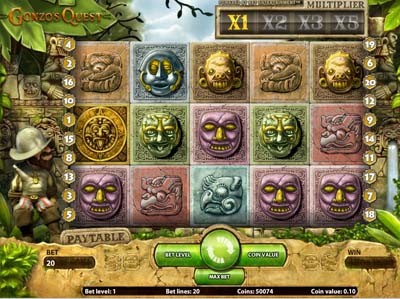 Fancy setting sail for the long lost city of gold, El Dorado? Well, so does Gonzo, so hop on board and go exploring with the Spanish conquistador. Spinning through the reels, you’ll be watched on by Gonzo himself, who is exceptionally well animated, providing many in-game delights as you go along. The reels are filled with various different Incan runes, and the lost city provides a beautiful backdrop, being just within your reach.

The game includes five separate reels, as well as three rows, while the pay lines that are incorporated stand at 20. The coin value that is included in the game starts from a minimum of £0.01 and can be increased up to its maximum of £0.50 per line. Changing the bet level between its minimum of one and its maximum of five will allow all players to place a maximum overall wager of £50 per spin.

The game’s Avalanche feature is its first and foremost special feature. Whenever a win is formed, the included symbols will disappear and make room for new ones. Should another win be created, the same thing will happen again. With the more avalanches that are created, a multiplier will increase as well, which can be seen in the top right hand corner of the interface.

Wilds are represented by the stone with a question mark on it, and this will stand in for any other symbol on the reels to make a win.

Freespins, or free falls as this game classes them, are triggered by the golden stone. Each bet line containing three of these in succession will activate 10 free falls. Additional free falls can be won during this round as well.

Gonzo’s Quest is one of Netent’s most popular games, thanks to the strong selection of added extras and specialities.