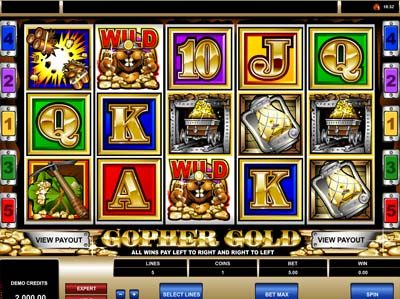 Gopher Gold presents avid gamers with a more 2D-looking game, but still with a good theme behind it. Obviously, the play on words of ‘Go For Gold’ is another coo by Microgaming. As far as the icons that are in the game are concerned, these start with A, J, K, Q and 10. Joining these symbols are other more thematically relevant offerings. These include a lantern and a mining pick axe. There’s also a mine cart filled with gold and a TNT explosion. And don’t forget about the game’s own logo as a symbol either.

Players can see that they play the game on a five reel and three row interface. The developer has also incorporated a total of five different pay lines as well. The ‘Select Lines’ button allows you to change these, while your wager is adjustable too. This is done by using the plus and minus buttons on display. The minimum overall wager you can play is £1.25. The maximum stands at £100 per spin.

There aren’t a huge amount of special features in this game, which is unfortunate. However, you do have the chance to play in ‘Regular’ or ‘Expert’ mode. The latter of these basically allows you to use ‘Auto Play’ as an additional feature.

Both of these modes also include a wild symbol though. It’s the gopher that represents the wild and it acts in the standard way. This means that it substitutes for any other symbol on the reels in order to form a winning combination.

This Microgaming offering provides gamers with an intriguingly-themed game. However, it doesn’t really have many underlying features. It’s still an appealing enough option to play though.