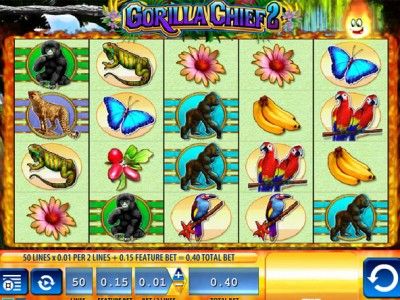 It stands to reason that a game called Gorilla Chief 2 would be all about animals, and that’s just what it is. You’ll find reels filled with parrots, toucans, iguanas, cheetahs and other forms of wildlife. Of course, the gorilla also appears on the reels in one or two forms. You’ll be spinning the reels of this game whilst situated in the middle of the jungle, which is fairly odd considering several of these animals don’t actually appear in such a setting.

Gorilla Chief 2 provides players with a five reel and four row layout, as well as 50 separate paylines. These are fixed paylines, and the coin values can be changed between the minimum of £0.01 and the maximum of £5.00 per two lines. Therefore, you’re able to bet a maximum of £200 per spin. This amount also includes a feature bet of £75.00 for the maximum wager.

The close up of the gorilla’s face acts as this game’s wild symbol, and this will substitute for any other symbol on the reels to craft a winning combination. It will only appear on reels two, three, four and five, and the only symbol it won’t stand in for is the feature icon.

And speaking of the feature icon, this is represented by the image of the sun setting. Three of these appearing scattered across the reels triggers the bonus feature of 10 freespins. Additional wild symbols are added to the reels for this round, and the Hot Hot Super Re-spin can also be triggered during freespins as well.

Gorilla Chief 2 is an intriguing game to play, especially for those who enjoy animal-themed products. The addition of the freespins round is most welcome, while the Hot Hot Super Re-spin just adds extra benefits to an already exciting game.