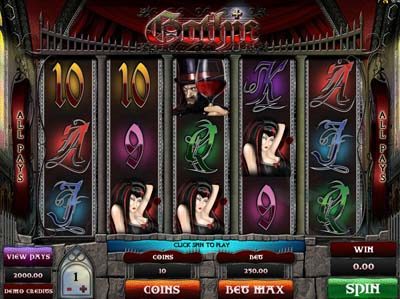 If there was ever a theme that hasn’t been explored, ‘Gothic’ from Genesis Gaming is sure to bring you a unique experience. Presenting you with a darkened backdrop, as well as reels which are filled with symbols representing the theme, you’ll be sure to be just a little spooked by the goings on of this game. Icons added to the reels include burning candles, a raven in mid flight, a fortune teller’s glass orb, and on top of this, two character icons – one of a top-hatted male holding forth a glass of wine, and the other of a vampire-like female.

As well as its imagery, Genesis have provided this game with a five reel and three row layout. This is joined by a total of 243 ways to win, which is not something that is able to be customised. However, players are able to alter the bet amount of each round, switching the coin value and amount of coins per round up and down. The coin value can be changed from its minimum of £0.01 up to its maximum of £1, while the amount of coins wagered are able to be moved from one to 10. This allows players to place a maximum overall wager of £250 per spin.

The fortune teller’s glass ball provides this game with its wild icon, and this will substitute for all other symbols on the reels in order to form a winning combination. The exception to this rule is the scatter icon.

And speaking of scatters, this icon is represented by the ruby-stoned gold chain. These will pay out wherever they appear on the reels, with five of them showing up paying out a maximum amount of £1,250. Should three or more of these appear on any of the reels, you’ll trigger the ‘Gem Pick’ feature. This requires you to choose from 15 different gems, and you’re able to pick as many as you possibly can before the ‘Collect’ image is revealed. Behind each of the other gems is a cash prize.

While Gothic isn’t particularly going to win any awards for creativity as far as its special features go, it does present an often overlooked theme to the gaming universe, and in that, Genesis has to be respected.