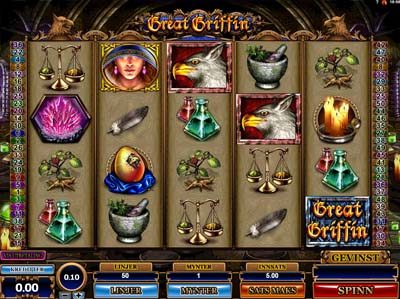 The griffin is a creature of Greek and Egyptian origins. It has the body of a lion as well as the head and wings from an eagle. The eagle’s talons also form its front feet. The design of this game surrounds the mythical being, featuring magical reels and gameplay. On the reels, you’ll find the game’s icons. These exist first in the form of a feather, a set of weighing scales and a sprouting tree. There’s also the pestle and mortar, two vials of liquid and a spell book. Four more icons are presents as three candles, a hatching egg, a talon around a yellow pearl and a purple crystal.

There are five reels and four rows within the Great Griffin game, so this provide players with a slightly larger interface. It also has 50 different pay lines within. Microgaming allow players to change the amount of active lines as well as the bet they place. The value of a single coin changes between £0.01 and £0.20. Meanwhile, the amount of active coins per line is adjustable between one and 10. This means that a maximum overall wager of £100 per spin is accepted.

There are some pretty nice specialities within this game, starting with the Griffin Wild Bonus. This ensures that during any spin, the griffin may randomly fly across the reels. When it does, it will change some symbols into wilds. And speaking of wilds, these will stand in for all other icons on the reels, forming wins. The only exceptions to this are the scattered logo and scattered lady symbols.

Spinning three of the lady icon into view in any location rewards you with the Pick Me Bonus. In this round, you can receive up to 150 times your initial stake.

There are some great features in this game and it includes some wonderful graphics as well. The theme is a perfect base idea for a slot game. Furthermore, it’s provided by Microgaming, so you know you’ll have an interesting product on hand.