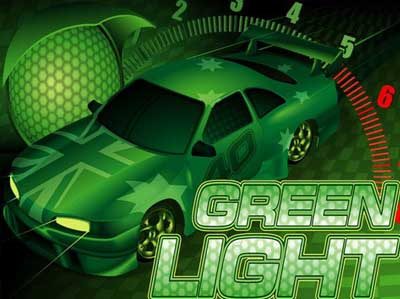 Are there any racer fans present? If so, we’re sure they will be able to perhaps appreciate this title more than the rest of us. Green Light is a slot machine presented to you by developer RTG. The theme is obviously car racing. And even the backdrop of this title comes in the form of a checkered black-and-white racing flag. This is a somewhat dated title, though, so the graphics aren’t of the finest quality. Nevertheless, there are still animated features to entertain you and some of them might even pleasantly surprise you later on during gameplay. The base game does not come with a soundtrack of its own. Besides some of the boring, generic sounds that are audible for winning combos, you will only hear the reels spinning. That does change during the special features, though. 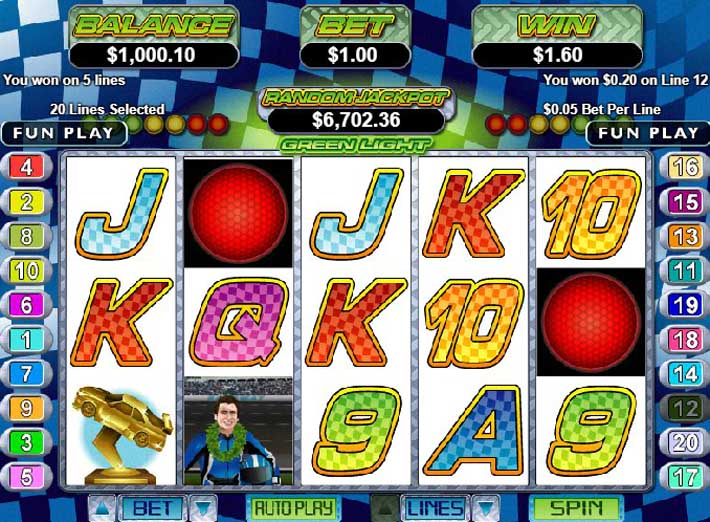 As for the icons, they kick off with the lower valuable card symbols. As is custom, these come in different colors. However, the developers have designed them to fit in with the theme, as well. They mimic the same checkered pattern as the flag in the backdrop. And the symbols in question are A, K, Q, J, 10 and 9. After that are the higher value icons, starting out with the bottle of champagne and a golden trophy in the shape of a car. Then we have a female character symbol, and finally there is the race car icon. The layout in Green Light is pretty much the same as you see it in the vast majority of online slot games. There are 5 reels and 3 rows, and they come with a total number of 20 paylines. And typically for RTG, the paylines are flexible, so you can even play with just a single paylines if you want. This reflects on the stakes, which start at a minimum of just 20c per single round. And the maximum bet can set you back a total of $5 per spin.

The Driver symbol, who apparently also just won the race, is the Wild. He will be able to stand in for any of the regular symbols on these reels, save only for the game’s Scatters. This way the Wild will complete other winning combinations and increase your winning potential and possible wins. And to ensure that this happens, it will also double the payouts for any winning sequence it contributes to. Furthermore, you can expect to see the Wild symbol in any position, anywhere on the five reels during gameplay.

As for the Scatter symbol, it comes in the shape of a round white light. Just like the Wild, it can also land anywhere on the screen. And whenever it does appear on the reels, you will see it change to either red or green. Your goal will be for them to change to green lights, in order to benefit from them. Only green lights will pay out, and only they can trigger this game’s special feature. And in order for you to trigger it, you will need to land a minimum of 3 Green Scatters at the same time on the reels.

Now, the special feature in Green Light is truly a remarkable one, because you actually get to race. First you will need to choose the car you would like to race with. After this, you will enter the first round of racing, where you will have 4 opponents. Depending on how well you do during the race and in which place you finish, you will receive a certain number of freespins. This can be 5, 10, 15, 20 or 25 freespins.

If you happened to have finished 1st or 2nd, you will then get to partake in the second race. The results of the second round will determine the cash prize that you will receive. It will also depend on the place you finish in. Thus, the prize can be 5, 10, 25, 50 or up to 100 times your total stake. Finally, the freespins round will begin. And all throughout its duration you will also get to enjoy a 2x multiplier. So, all freespins winnings will be doubled. Better yet, players can also retrigger this feature and receive even more freespins. Last but not least, let’s also not forget that this slot game comes with a Progressive Jackpot, as well. You can potentially win it completely at random after any spin.

Green Light is an entertaining offering, even though it lacks the sophistication of the visuals that many modern slots strive for. It’s a medium variance offering from RTG, offering pretty decent winning opportunities. You will get to trigger the racing feature at relatively even intervals, which is great. And thanks to the 2x multiplier, the prizes will prove to be very satisfying.