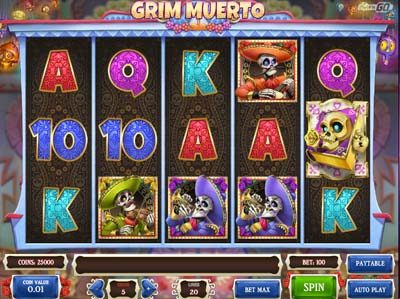 Taking you to the streets of Mexico during the celebratory cinco de mayo event, Grim Muerto presents you with a game that is backed by guitar-influenced music. It’s full of Mexican charm, offering up various different icons to get into the party spirit with. These begin with the often seen A, J, icons, and they’re joined by icons of four different skeletons playing musical instruments. There’s one with an accordion, another with a fiddle, a third with a trumpet and the last one with his guitar.

As a game layout, you’re offered up five reels and three rows, so it’s a standard interface for you to play on. Play’n Go have also included 20 pay lines and these cannot be customised in any way. However the bet per spin can be changed by first of all adjusting your coin value between £0.01 and £1. You can also alter the coin value that you wager per pay line between one and five, so you’ll have a maximum total bet possibility of £100 per spin.

A game that is as vibrant as Grim Muerto should have some decent special additions to it, and this one certainly doesn’t disappoint in that area. First of all, there is a wild icon in the form of a golden guitar. This will stand in for all other icons, except for scatter symbols, in order to form a winning combination on the reels. Should five of them appear on a winning pay line, you’ll receive a maximum pay out of 1,000 coins.

During base game play as well, one reel is randomly selected and highlighted per spin. Any wild icons appearing on this reel will expand, replacing all others on the reel. During the freespins round, between two and five reels will be highlighted.

And as far as freespins are concerned, this round will be activated when three book icons come into view in any location. You’ll receive 10 freespins and one of the band members becomes an extra wild throughout. Furthermore, if you spin three candle icons into view during this round, the freespin round will be re-triggered.

Finally, there’s a ‘Second Chance’ round as well, which is triggered by two scatter icons appearing. Simply select one of the band members to reveal the award.