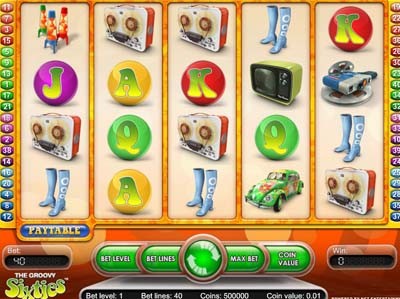 If you were alive in the sixties, then there’s little doubt that you witnessed a great era. Fashion. Music. Movies. Furnishings. The sixties are still lauded over as being a revolutionary period in history. And from the icons appearing on the reels of Netent’s Groovy Sixties game, it’s clear to see why. Knee-high boots, lava lamps, flower power cars and record players are all present as symbols on this one, and the game is backed by a rock ‘n’ roll piece of music which is all relevant to the age. The product is a part of the series of games which provide a flashback to years gone by, with other titles including ‘Funky Seventies’ and ‘Super Eighties’.

The game offers a five reel and three row layout to its players, while the inclusive pay lines are initially offered at 40. These can be customised to suit your own preferences. Meanwhile, the coin value is changeable from its minimum of £0.01 up to its maximum of £0.50 per active line, while the bet level is able to be changed between one and five. This means that the highest overall wager you can place is set at £100 per spin.

The game’s wild symbol is represented by its logo, and this will act as a stand in for any other icon on the reels, except for scatter symbols, in order to create a winning combination. These can appear in multiples as ‘Stacked Wilds’ on the reels.

There are also scatter symbols included, which is provided by the game’s female character. Three of these appearing anywhere on the reels will pay out your total bet multiplied by two, and will also trigger five freespins. Freespin wins are also doubled, and three more scatters appearing in the round will award five more.

This game gives players a chance to relive a little bit of the sixties, without the after effects of the time. The freespins and wild inclusions only serve to enhance game play and provide an all around interesting product.